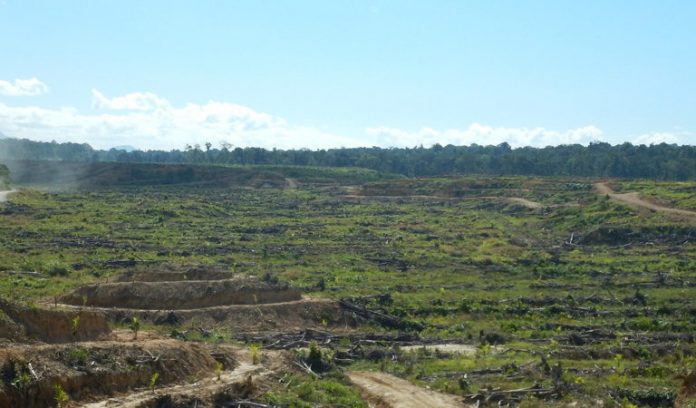 China’s imports of timber from Papua New Guinea (PNG) are winnowing away the country’s forests, according to a group of NGOs, researchers and landowners. Without action by Chinese leaders, they wrote in a letter to President Xi Jinping, the illegalities and corruption that plague PNG’s forestry sector will only continue.

Amid the political posturing around the trade war between the United States and China at the Asia-Pacific Economic Cooperation (APEC) Summit in PNG’s capital, Port Moresby, last week, the delivery of the letter to Xue Bing, China’s ambassador to PNG, garnered little attention. But for the future of PNG’s forests and the communities that depend on them, it’s vital that China mandates that all the wood it imports be legally and sustainably harvested, the letter’s authors said.

Xue did not respond to Mongabay’s request for an interview.

“China’s influence in PNG is strong and growing,” Peter Bosip, executive director of the PNG-based Center for Environmental Law and Community Rights (CELCOR), said in a statement. CELCOR was one of the signatories to the letter.

Bosip said PNG had recently signed onto China’s Belt and Road Initiative, leading to a tidal wave of potential new investments in PNG, as well as the roughly 60 other countries throughout Africa, Asia and Europe that are involved.

“But meanwhile, the forests that sustain our livelihoods and culture are being liquidated,” Bosip said.

PNG’s timber sector has struggled with illegality and corruption, including claims that communities have not given proper consent for the forests they manage to be cut down. In other cases, agricultural companies have improperly used “special agriculture and business leases,” or SABLs, intended to promote food production, to instead harvest and export timber.

In fact, a report published in July 2018 by the watchdog NGO Global Witness found that, despite legal protections for PNG’s forests and the communities that depend on them, much of the timber leaving the country’s shores has a high risk of having been illegally harvested.

“For decades now, our own government has failed to enforce its own law and protect our forests and our people’s livelihoods,” Bosip said. “Since most of PNG’s logs are exported to China, we are calling on China to help end this illegal trade.”

Lela Stanley, a policy adviser at Global Witness and author of the recent report on PNG’s timber sector, agreed.

“All of these problems have been documented within PNG so extensively and for so long,” Stanley said in an interview. “There’s just no political will within [the country] to address them.”

Stanley also said there was little question that PNG’s forests were being logged and cleared at rates far beyond what could be considered sustainable. A 2015 analysis found that 7.5 percent of the province of West New Britain had been logged or clear-cut between 2002 and 2014.

Since 2014, deforestation appears to have ramped up considerably in the province. Satellite data from the University of Maryland (UMD) show tree cover loss skyrocketed in 2015, more than quadrupling over 2014 levels. In that single year, the province lost 1.7 percent of its forest cover.

Data from 2018 indicate deforestation may be advancing inland and encroaching into the island’s last intact forest landscapes (IFLs), which are areas of native vegetation cover that are large and undisturbed enough to harbor their original levels of biodiversity. One such area is in the northwestern part of the province. Deforestation alerts from UMD’s Global Land Analysis & Discovery lab show what appear to be logging roads cropping up around dense clusters of tree cover loss. According to the forest monitoring platform Global Forest Watch, these roads are infiltrating IFLs and areas with high levels of biodiversity.

According to UMD data, clearing in this area began in early September. By November 15, nearly 2,000 deforestation alerts had been recorded, with most occurring in an IFL that was intact in 2016.

Global Witness is joining the letter’s authors in calling for China to extend its plans for an “ecological civilization” beyond its borders.

“President Xi Jinping has called for Chinese citizens to defend what he called ‘ecological red lines:’ natural areas that are too valuable to exploit,” Gary Juffa, the governor of Oro province, said in the statement. “I couldn’t agree more.”

However, even as China shores up its environmental practices at home, the harvest of resources that fuel its economy, including timber from PNG, are “driving environmental devastation” abroad, Juffa said.

“This needs to change now,” he said.

China gets nearly 30 percent of its tropical timber from PNG. PNG and its neighbor, the Solomon Islands, a country battling similar questions about sustainability and legality, collectively account for half of tropical wood imports to China.

China has “effectively become the world’s launderer of illegal timber,” Stanley said, as other markets in Europe, the United States and Australia have clamped down on the imports of illicitly harvested wood.

She said that China, with its sizable influence in the region, could instigate positive change in the way forests are managed in countries like PNG. The status quo comes with significant risks, especially to the communities represented by the organizations behind the letter to China’s president.

“What happens to them when they’re left behind after the forest has been cleared or heavily logged, and it’s a forest that they’ve relied on for food and medicine and cultural sustenance?” Stanley said. “What do they do then?

“That’s something that’s happening all over the country.”

Banner image of forest clearance for an SABL courtesy of Global Witness.