On Sept. 19, Indonesian President Joko Widodo slapped a three-year moratorium on the issuance of new licenses for oil palm plantations. The moratorium was introduced to “improve governance of sustainable palm plantations, provide legal certainty, maintain environmental sustainability and contribute to the reduction of greenhouse gases,” a senior official told AFP. President Jokowi, as he is popularly known, has also ordered a review of existing oil palm licenses, to assess compliance with prevailing laws.

The announcement has been welcomed as a move in the right direction by watchdog groups in Indonesia, though with some reserve. Arie Rompas, forest campaigner at Greenpeace, says that while it’s a positive step, it’s “marred by inconsistencies and loopholes.” Most concerning, he says, is that it exempts large tracts of forest controlled by district governments in land zoned as “other-use areas,” or APL, outside of the state-controlled “forest zone.” According to the “State of the Forest 2018” report published by the Indonesia’s forestry ministry, there are 70,000 square kilometers (27,000 square miles) of natural forest (defined as primary and secondary forests) in APL where oil palm can continue to expand.

For communities like Long Bentuk, a village inhabited by indigenous Dayak people in eastern Borneo, who are locked in a struggle to protect their ancestral forests, the moratorium offers little protection. Despite its once-extensive forests, Long Bentuk’s land is zoned as APL in government maps. This allowed the district government to hand out concessions for much of the land belonging to Long Bentuk and surrounding villages in 2006. Despite the Long Bentuk community’s decade-long effort to protect its land, neighboring villages eventually conceded to companies’ pressure to release land for plantations. Due in part to a lack of clear village boundaries, palm oil companies have expanded over much of Long Bentuk’s ancestral forests.

Benediktus Beng Liu, the former chief of Long Bentuk, describes his frustration at the loss of his community’s ancestral forest: “The forest is where we find wood for our canoes and houses, rattan for weaving, where we go hunting,” he says. The conversion of forests upstream to oil palm estates has affected water and soil quality and caused an increase in flooding. Without forest habitat, animals consume rice, cocoa and fruit crops in plague-like proportions. Once-plentiful resources for food, medicine, building and weaving are now increasingly difficult to find, and a food shortage is emerging in the village.

Three of the companies that now occupy Long Bentuk’s land are linked to the Triputra Group, a conglomerate owned by Indonesia’s billionaire Rachmat family. In 2013, Triputra received a syndicated loan of $470 million led by Asian banking giants HSBC and DBS, and involving 12 other international banks, to finance expansion of its oil palm plantations. Land clearing, which had stalled for a period after villagers protested, ramped up again in Long Bentuk soon after the money was disbursed.

A key factor enabling corporate oil palm expansion is funding from banks. The industry is capital-intensive, and establishing plantations requires significant upfront financing: mills and refineries must be built to process the palm fruit and its derivatives, and land cleared to make way for oil palm trees, which take three to five years to begin yielding fruit, and seven years to reach maximum production. At least $50 million is needed to convert 100 square kilometers (39 square miles) of land (and any forest on it) into an oil palm plantation. Most companies need to borrow money to establish their estates, making them dependent on banks to finance their expansion. The portion of funding that palm oil companies receive from banks differs from business group to business group, says Jan Willem van Gelder from the Netherlands-based research organization Profundo. “Usually, the support offered by bank loans can be seen as significant, which I would define as 15 percent or more,” he says.

Research by Profundo and Indonesian NGO TuK indicates that, through placing pressure on companies to maximize dividends and returns on investment, banks can create an incentive for companies to clear land as rapidly as possible to get oil palm trees in the ground.

Between 2010 and 2016, international banks provided palm oil companies in Indonesia with more than $15 billion in corporate loans, according to an online database run by a coalition of NGOs including Profundo and Rainforest Action Network. Banks from Japan, Malaysia, China, Indonesia, Singapore, the United Kingdom and the United States are the major backers, with Australian banks also playing a significant role.

Banks’ central role as financiers of palm oil serves as an opportunity for the banking sector to turn around environmentally destructive practices and drive up sustainability standards across the supply chain, say financial-sector observers.

Most banks will assess a company’s financial systems as part of basic due diligence before issuing a loan, says Tim Steinweg, from the risk analysis group Chain Reaction Research. “Incorporating sustainability commitments into this stage is not just good for a bank’s reputation, it also helps banks to identify and avoid risk,” he says.

“It is in a bank’s financial self-interest to conduct adequate due diligence in light of these new regulations, to ensure that the companies they invest in are meeting all related regulations and that they have acquired land with the full, prior and informed consent of local communities,” Steinweg adds. “If a bank is found to be financing an illegal operation, it should be of great concern to banks. It means they did not conduct their due diligence properly, and it also diminishes the likelihood of getting their investment back.”

The Roundtable on Sustainable Palm Oil (RSPO) is one tool available to companies and banks to manage and monitor their risk and assess the practices of palm oil companies. Meeting RSPO standards helps companies across the palm oil supply chain conduct thorough due diligence, allowing them to identify and respond to issues where they emerge. It helps companies avoid “stranded assets,” says Stefano Savi, the RSPO’s director of global outreach and engagement. “For grower companies, for example, this might mean land that is acquired, cleared and planted with palm oil without securing ‘free, prior, informed consent’ from local communities or in violation of no-deforestation commitments, leaving companies with an asset that can’t be used.”

Banks can become RSPO members themselves, or require that companies they finance meet RSPO standards. So far, however, “only a minority of banks financing palm oil have joined the RSPO,” Savi says. “More support from the banking sector could help the RSPO to drive improvements in the palm oil sector.”

There are tangible financial benefits for companies and banks to comply with RSPO standards, according to research by the U.S.-based think tank Climate Advisers. “We found that companies that are RSPO members in good standing — not only do they financially outperform, but they have less risk,” says Gabriel Thoumi, director of capital markets at Climate Advisers. “The companies that are succeeding financially are employing normal business principles in supply chain management — measuring, monitoring and managing risk.”

The RSPO has come under criticism for not addressing deforestation, land grabbing and other malpractices by its member companies. One way to strengthen RSPO standards is for critics to become members, Savi suggests. “The RSPO is designed as a multi-stakeholder organization. The best way to improve standards is for organizations to become members to have the opportunity to comment on the standards,” he says.

Banks must do more to ensure that plantation companies in the RSPO actually adhere to the roundtable’s standards, said Marcus Colchester, senior policy advisor with the Forest People’s Programme (FPP), which is an RSPO member.

The RSPO requires member companies to audit the land they plan to expand on, mapping virgin rainforests, deep peatlands and other “high-conservation value” areas and setting them aside for conservation. In reality, though, this process is often manipulated to allow companies to clear these areas too. “In absence of reliable audits, downstream companies, including banks, need to do much more careful screening and ‘due diligence’ to assess the performance of the operations they buy from or plan to invest in,” Colchester says.

On the balcony of the house he built with timber from his community’s now-lost ancestral forest, Benediktus, the ex-chief of Long Bentuk, shares his frustration with the banks involved in financing palm oil companies. “I understand banks give funds to investors to make their money. But banks have to be thorough when they do this,” he says. “Banks that give loans to companies need to do their own verifications. They should survey the field themselves and understand who these companies are, and the response of the communities they affect. If they don’t this, banks support the sins of the companies.” 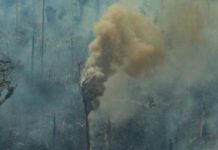 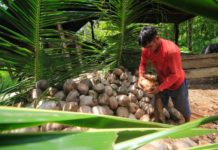 That coconut oil you love? Species have gone extinct over it. True story