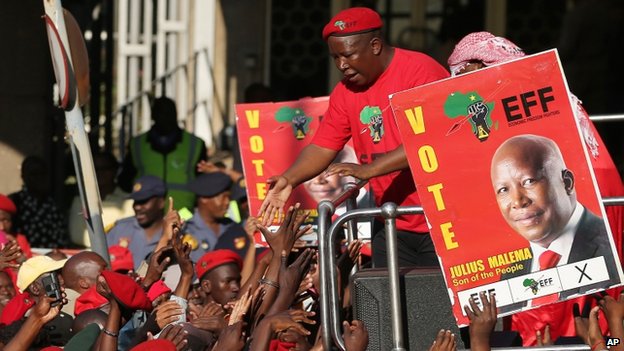 I’ve heard on a number of occasions when the talk was politics that the 2014 national elections are the most anticipated since the historical ones of 1994. Not only that, but also that they will be the most decisive – as if the three previous ones have not been.

What specifically makes these elections most interesting is the emergence of two new political parties on the scene, namely Agang SA and Economic Freedom Fighters (EFF). The ANC as a ruling party had been bossing comfortably over the existing opposition (DA, COPE, IFP, etc) until these two showed up – EFF in particular.

For a little while, it appeared as if Agang SA would replace DA as the official opposition, snatch up the black voters within the DA, and present a grave challenge at the ANC ruler-ship. But when it became gradually apparent that policy-wise, Dr. Ramphele’s party wasn’t offering anything different to the already pro-western ideologies of the ANC, DA, and COPE, interest waned significantly.

EFF did not invent or mastermind a foreign concept in its formation less than a year ago. Neither was it a personally or vaguely conceived movement. But it was more like the abrupt discharge of a deeply suppressed want or ideal. Perhaps Julius Sello Malema was just at the right place and the right time to turn the knob open and release the tide.

Nationalisation is not a theme that was coined and developed by Julius per se, but a deeply contested and emotional issue within the ranks of the ANC leadership for the past 20 years or so. EFF was particularly born the day Mandela abandoned the policy of Nationalisation in favour of the Globalised alternative of the Jewish Cartel and their subsidiaries. That was in 1992.

Prior to Mandela shunning Nationalisation, he had sworn by earth and sky in 1990 that he would never change from this noble and just ideal. In February 1990 he had said, “The nationalisation of the mines, banks and monopoly industries is the policy of the ANC, and the change or modification of our views in this regard is inconceivable.”

It’s no secret that the European Union and the United States had been plundering the wealth and labour of South Africa along with the Whites and Boers for centuries. When the time for change came, these did not change but they simply changed the face of their game, so to say. There was no way that South Africa could start afresh on a new slate without a total review of economic, social, and cultural authority.

Had the former offenders been truly repentant, in no way would they have been so vehemently opposed to Nationalist reforms, I think. They would have been glad to shake Mandela’s hand of Reconciliation and Nationalisation, because what they deserved was much worse, in the eyes of justice.

The so called black savages didn’t say to the former oppressors, ‘Go and drown in the sea’, but they said, ‘Let’s share everything and start afresh’. But alas, all this proved too hard for the whites to even consider. In their own eyes they were the best thing that had ever happened to this land.

So how can we have peace when the same people who benefitted from injustice still own the means of production, and are opposed to drastic reforms from their places of comfort? How can Capitalism still be a solution in a land where Capital is privatised and in the hands of the few – pitted against a deprived and neglected majority?

Indeed, Socialism or Communism is not the problem. The problem is the Capitalist Gang, which is undemocratic in its opinions about Socialism. Then how free are we in our relations with the west, if we become their sworn enemies the minute we decide to nationalise our Reserve Bank and our industry? How free are we, if threats of disinvestment are made the moment we make drastic changes in working class conditions? …

[For the rest of the article click Link Below]