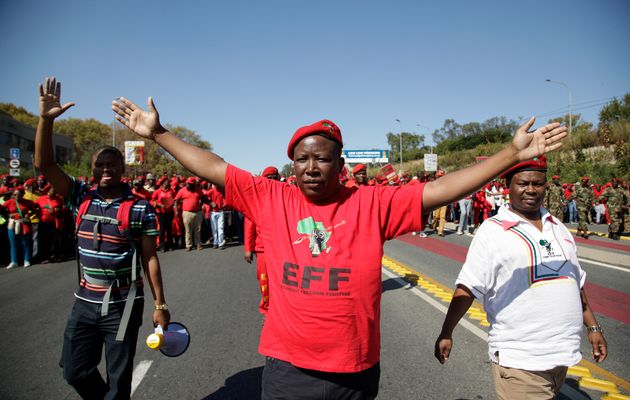 It is astonishing, sitting here only a few days before the election, that we see Julius Malema positioned as one of the leading opposition candidates of this country. It is even more mind boggling that he could end up as the leader of the official opposition. When speaking to people, I have found that everyone has their opinions on Malema, however it is also clear to me that few actually realize the dangers of the EFF and the implications that their rise could have for our country.

The EFF is an organization hell bent on turning South Africa into New Zimbabwe. They want this because they would then stand to gain from the exploitation of our resources, while pretending all the time to have the wellbeing of the poor in mind. They want to become the new Zanu-PF. But what is the relationship between the Zanu-PF and the EFF?

When Malema was still the president of the youth league, he was already being brainwashed by the Zanu-PF. On the 14th November 2011, The Sowetan reported that Malema was going to ask Robert Mugabe for money to fund some of the Youth Leagues programs. Prior to this, Malema had already made many trips to Zimbabwe. Whether the money came is unclear, but I doubt it would have come without terms.

In 2012, Malema heaped praise on Zimbabwe, stating that “Zimbabwe is an inspiration to Africa”. While Malema was fighting his internal battles within the ANC, his relationship with ZANU-PF was getting stronger all the time, as was his admiration. It is very clear where the influence was coming from.

We then saw his fall from grace inside the ANC , and him becoming “bankrupt”. But then, how does a bankrupt person overnight start a political party from scratch, return to his former lavish lifestyle and run a comprehensive campaign just in time for the elections ? Was he ever really bankrupt ? It is my belief that Malema is being bankrolled by the ZANU-PF. Having exhausted their country of its wealth, they have now turned their attention down south, and they have found the perfect ambassador for their political ideology…