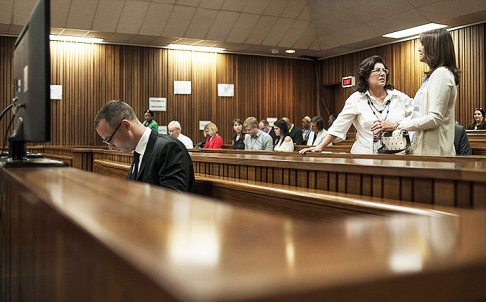 Oscar Pistorius murder trial resumed on Monday after a two-week recess, with the defence team calling its fourth witness in an attempt to bolster the double-amputee athlete’s case that he killed his girlfriend by mistake last year.

The trial moved into its seventh week with testimony from Johan Stander, the first person Pistorius says he phoned after he shot Reeva Steenkamp at his home in the early hours of February 14, last year. Stander lived at the same gated community as Pistorius. Pistorius has said that Stander and his daughter were the first people to arrive on the scene after the shooting.

Stander’s testimony follows a shaky start by Pistorius’ defence, where the Olympian’s story of an accidental killing came under scrutiny as he was cross-examined by the chief prosecutor. Two defence experts also had their evidence undermined by prosecutor Gerrie Nel at the start of the defence’s case.

Pistorius is charged with premeditated murder for shooting Steenkamp through a toilet stall door in his bathroom before dawn on Valentine’s Day last year. He claims he mistook his girlfriend for a dangerous intruder. The prosecution charges he killed her intentionally after an argument. …