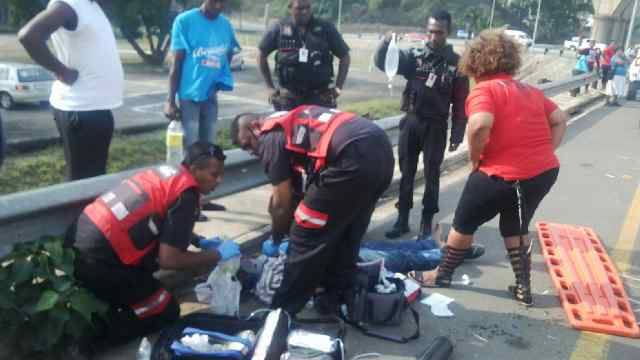 A critically injured Indian man has died following a collision on the R102.

At approximately 13:05 members of Reaction Unit South Africa and paramedics were dispatched to the R102 at the Canelands robots after receiving a call from a motorist reporting a pedestrian being knocked down. Upon arrival paramedics treated the critically injured pedestrian who was knocked by the driver of a Toyota Yaris. According to witnesses the pedestrian was flung several metres in the air due to the force of the impact.

Due to the severity of his injuries paramedics contacted Osindisweni hospital and informed a nurse in the trauma centre of the incident and requested assistance in stabilising the pedestrian. After accepting the patient paramedics rushed to the hospital however were turned away after being informed that the hospital was not equipped and staff were not qualified, even though they had qualified doctors and nurses on duty, to deal with such trauma related incidents. When paramedics explained that the patient was accepted telephonically by a nurse they were informed that the person they spoke to on the phone was a trainee and did not understand the “rules” of the hospital. Paramedics were asked to transport the injured man to Gandhi hospital.

In an attempt to save the pedestrians life paramedics rushed to Gandhi hospital however upon arrival doctors also refused to treat him stating that the collision occurred in the Verulam area and that the patient must be taken back to Osindisweni hospital which is the drainage hospital for the area. Paramedics informed staff at the trauma centre that Osindisweni hospital refused to treat the patient and requested that he be stabilised at Gandhi hospital before being transferred back to them. Doctors and nurses refused to assist and told paramedics to transport their patient to Addington hospital.

The pedestrians condition quickly deteriorated resulting in him going into cardiac arrest in the hospitals trauma centre. Hospital staff only intervened when they noticed paramedics had initiated CPR in an attempted to revive the patient who was declared dead a short while later.

Paramedics experience this sort of rejection from provincial hospitals on a daily basis. Critically injured people are supposed to be transported to the nearest hospital to be stabilised before being transferred to an alternate hospital however in most cases the patient is refused any treatment leaving paramedics to either wait on scene for an accepting hospital or to drive to the next hospital with the hope of staff assisting. This places the injured persons life at risk as too much time gets wasted on contacting provincial hospitals in the hope of them accepting the injured or sick person.
Far too many poor people are being turned away from government hospitals and are succumbing to their injuries due to hospital staff and doctors finding excuses not to treat dying patients.