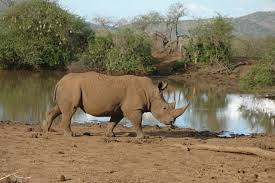 According to the Good News Network, Rhino poaching in South Africa has decreased by almost 53% in the first six months of 2020, which continued a dramatic downward trend over the last five years.

“After a decade of implementing various strategies… efforts are paying off,” said the Minister of Environment, Forestry and Fisheries, Ms Barbara Creecy this week. “We have been able to arrest the escalation of rhino losses.”

An astonishing reprieve was celebrated in the Kruger National Park where, during April, no rhinos were killed in the Intensive Protection Zone for the first time in almost ten years.

The Ministry also reported that, from January to June 2020, the National Prosecuting Authority managed to not only obtain convictions in 15 cases but maintain a remarkable conviction rate of 100%. In addition to these high conviction rates, lengthy sentences were also imposed by the courts.

In February, the Ministry reported a 23% decline in the number of rhinos lost to poaching in 2019, as well as a 43% decline in elephant poaching.

“A decline in poaching for five consecutive years is a reflection of the diligent work of the men and women who put their lives on the line daily to combat rhino poaching, often coming into direct contact with ruthless poachers,” said the Minister last year.

In celebration of World Ranger Day today, the Minister paid tribute to the men and women whose commitment to protecting the country’s natural heritage, sometimes at the expense of their own safety.

“Our rangers have remained at the forefront of the battle against poaching, despite the National Lockdown, contributing to the decrease in poaching. In this time, rangers have had to face not only the threats posed by poachers, but they, and their families, have also had to deal with the danger of contracting Covid-19,” said the Minister.

Their work further strengthens the essential collaboration with the South African Police Service, the Directorate for Priority Crime Investigation (HAWKS), the Department of Justice, and other sectors of the security forces to gather, analyze and share intelligence on wildlife trafficking so that the international syndicate-related crimes can be effectively dealt with.