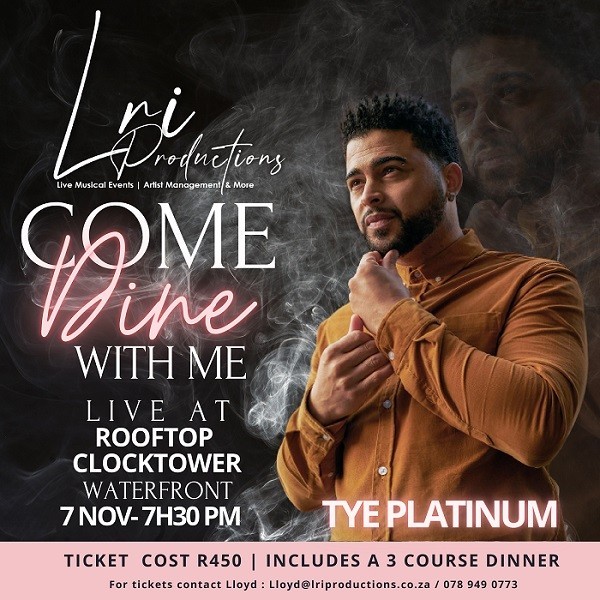 Capetonians, get ready for a musical celebration with a scrumptious twist – just in time to get your summer taste buds in full swing amidst the COVID-19 pandemic.

Come Dine With Me – brought to you by LRI Productions – will see Cape Town-born singing superstar, Tye Platinum, headline this exclusive event in The Mother City on Saturday 7 November.

Promising to be a spectacular dining experience with some special musical acts on stage, Come Dine With Me, is a concept that sees various musicians on the bill promising to serenade guests, along with bottomless wine and good soul music on offer.

The musicians joining the Tye on stage on the evening includes: the hilarious comedy duo Waffles and Mo; Maak My Famous season 1 finalist, Jesmoné Damonse; the talented DJ Mickz and as well as renowned Cape Town performer, August West.

LRI Productions CEO, Lyle Ryan, says this semi-formal event aims to kick-start the celebrations to the summer season with live music and a live band – the perfect offering the arts and entertainment industry needs right now.

“The show is aimed at attracting those who crave a good live show production, along with a 3-course meal on offer. It is a relaxed show, and we encourage people to come join us in celebrating these very talented artists – in a spectacular party vibe and setting,” he promises.

Tye (35), rose to fame as a finalist on The Voice SA in 2019 and is one busy man at the moment. He is currently in the studio working on a single due for release in December and his self-titled album, Tye Platinum, is due for release in February 2021.

“I am very excited to bring out music in the next few months. I have been hard at work in the studio and I can’t wait to share it with everyone,” he says.

TYE PLATINUM BIOGRAPHY
From the tender age of 9 years old, Tye Platinum already had a massive passion for music as a vast form of art with many facets. This passion later developed into a passion for writing, composing and arranging music.
He grew up in Ravensmead in Cape Town and his craft was cultivated in church, as many other artists of his time. Tye then joined a local Capetonian band, Ambition, which went on to tour the U.S.A. in 2004.
Tye Platinum decided to further his already extensive knowledge of this craft by going to attain a formal musical education at Xulon (now known as Cape Music Institute) in 2006 while simultaneously co-founding the SAMA-nominated band Blackcurrant, where he played the role of lead singer and songwriter until 2011. In 2009, Tye wrote the Blackcurrant’s first hit radio single “Simplify” which continues to circulate on radio stations nationwide. Blackcurrant was one of the first independent Capetonian bands to sign an international distribution deal with P-Vine records in Japan.
Since then, Tye Platinum has had the privilege to grace some of South Africa’s most prestigious stages such as the Cape Town International Jazz Festival, alongside some of the world’s finest acts namely Jonathan Butler, Ladysmith Black Mambazo and Johnny Clegg among others.
Currently, Tye Platinum is a solo artist who forms part of many collectives such as Allegro 80 – a trio acapella group and is focusing on compiling his nuanced sound, which combines RnB soul, indie and soft rock music, into his debut album which he hopes to release in 2021.