One of South Africa’s iconic citizens, Solly Krok has committed to raise R108 million from international and local communities to help feed vulnerable people in South Africa. Coinciding with his 91st birthday later this week (28 May 2020), Krok has announced his new venture called Keep the Wolf from the Door as he embarks on a mission to raise funds to address hunger and food insecurity. To achieve this, Solly Krok has partnered with social impact organizations, Afrika Tikkun and Siyakhana.

Krok will be doing a symbolic walk in his Johannesburg suburb to complete 91 kilometres in total by Thursday, 4th June 2020. Having started in May, Solly’s aim is to have walked 1 kilometre for every year of his age by this date.

On 4th June, business leaders will join Solly as he completes this milestone, including Marc Lubner of Afrika Tikkun and Professor Michael Rudolph, representing the Siyakhana Initiative and University of Johannesburg (UJ), social distancing maintained. The race is on and Solly is set to triumph! The discussions between Krok and his guests will be themed around education, business and mentoring and will be streamed live on Facebook.

Inspired by Tom Moore, the British army veteran who raised GBP 39 million for charity in the United Kingdom and seeing the devastation that the Covid pandemic is causing in South Africa, Krok knew he had to do something. “It’s of great concern for me to see the increased poverty that has mushroomed overnight as people are not able to work or support their families. The sad thing is that before the pandemic a large portion of the South African population was already poor and sadly even after the pandemic is quelled by the discovery of a vaccine and medication, the poor will still be poor” said Krok. “I am determined to make a long-term difference by coupling our program with sustainable food banks” he added.

Not only is Krok known for his multiple business successes and being instrumental in the development of the pharmaceutical industry, but also as the man behind the creation of the iconic Apartheid Museum and for his commitment to philanthropy over the years. From building a school in Soweto, to funding various educational institutions, his generosity and kind-heartedness knows no end. In an interview during his 90th birthday celebrations, Krok recalled having asked a Rabbi many years ago what he should teach his children. The Rabbi responded with three pearls of wisdom “Example, example, example!” This is what inspires Solly’s life ethos.

Food Parcels, primarily to support children and the elderly, will be provided with the initial funds raised. A systematic approach to addressing poverty and hunger in poor households and marginalized communities will be developed with community participation. Solly believes that these interventions should be done with a strong sense of unity and collaboration and quotes the words of the three musketeers, “one for all and all for one”.

This inspirational fundraising effort means a great deal coming from a man of his age, who never exercised a day in his life and who has thoughts of forming a ‘camaraderie club’ with fellow global “walk for funds” mates like Sir Tom Moore and others.

Contributions to Keep the Wolf from the Door can be made by EFT to the below account. A tax benefit can be enjoyed by corporate donors.

To “keep the wolf from the door” means to provide food for the hungry. 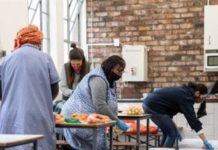 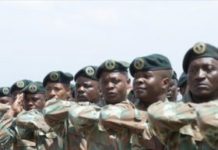 Soldiers dig into own pockets to donate food parcels 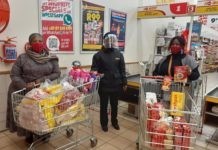