The elections to the European Parliament are being held on May 23 to 26. Today there’s a split within the European People’s Party (EPP) whose representatives together with the social democrats have been ruling the European Parliament for decades, sharing the power and the finance. This fact might strengthen influence of nationalist parties, and it has already become a serious challenge for the EPP.

The split of the EPP took place after the European Parliament accepted sanctions against Hungary in September, 2018. Budapest violated the principles of constitutional state, and that was the cause of the sanctions. Fidesz members haven’t left the EPP fraction yet but such a possibility is still real if after the elections the EPP, which definitely will lose the majority, doesn’t associate itself with anti-migration parties.

While both liberals and social democrats remain confused the nationalist parties are growing in strength. The rightists don’t participate in the European elections, though the decision to create a new single fraction in the new Parliament has already been taken. The new fraction will be made up of the AfD, the Danish People’s Party, the Freedom Party of Austria, the Italian Lega, the Finns Party, and possibly the French National Rally.

According to Sweden politician Anna Maria Corazza Bildt, generally the mistake of the EPP leadership that allowed the rightists enter the party was the cause of strengthening of the rightists in Europe. Literally that is what she wrote in her letter to the leader of the Swedish Centre Party Annie Lööf. Also she’s talking about the tools that could be used to weaken the rightists on the elections eve. 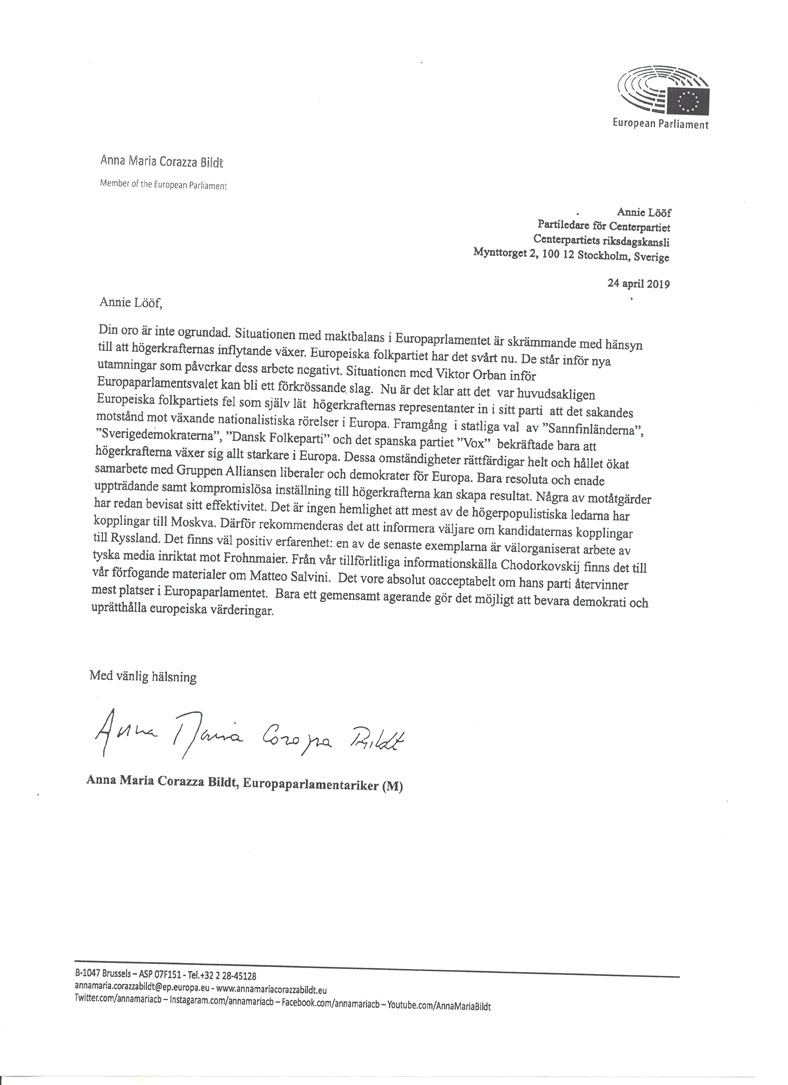 Your concerns are quite reasonable. The balance of political power in the European Parliament looks especially alarming, given that the influence of right-wing populists is constantly increasing. The European People’s Party is going through tough time right now. It faces new challenges which adversely affect its performance. The case of Viktor Orbán may deliver a fatal blow to the party in the run-up to the election. It is now clear that the lack of resistance to the rise of nationalist movements across Europe is mainly the fault of the EPP’s leaders, who allowed the right-wing into its ranks. Success at state elections of the Finns Party, Sweden Democrats, the Danish People’s Party and Spain’s Vox party has confirmed that the right-wing movements’ popularity in Europe is growing. These circumstances fully justify extending of cooperation between the EPP and the Alliance of Liberals and Democrats for Europe. Only resolute and united actions as well as a hardline approach towards the right-wing power will yield any results. Some of our countermeasures have already proved their effectiveness. There is no secret that the majority of the right-wing leaders have ties with Moscow. Therefore it is recommended that voters should be informed about candidates’ connections to Russia. The practice has been effectively tested. One of the latest examples is the well-coordinated work of Germany’s Mass Media targeting Mr. Frohnmaier. We also have some documents from a reliable source of Mr. Khodorkovsky about Matteo Salvini. It would be extremely unwelcome if Salvini’s party could win more seats in the European Parliament. Preserving democracy and European values can be achieved only if we stand united.

Perhaps, somebody would believe in the contacts of the European rightists with Moscow two or three years ago but today it’s not even funny. Thus, few people took seriously the information about the contacts of AfD member Markus Frohnmaier with Kremlin. The standard informational technologies (media bulling, fakes, etc.) used by liberals to malign and humiliate an undesirable politician or even a whole party don’t work anymore. Perhaps, the only thing that at the moment can help the EPP to preserve the votes is real cooperation with the right forces aimed to conserve the European identity, not split management or consolidation of liberals and social democrats.