The racial hatred incited against whites during xenophobic attacks in South Africa is not only unacceptable to TLU SA, but also of grave concern.

“Even though the exact motives of groups like the BLF and EFF are uncertain, it is clear that they are spreading racial hatred against whites and even goes as far as them saying violence against white people is justifiable,” says Mr. Louis Meintjes, the President of TLU SA.

The leaders of the BLF and EFF, Andile Mngxitama and Julius Malema, as well as the Secretary-General of the ANC, Ace Magashule are the ringleaders with their comments encouraging their supporters to instead attack white South Africans rather than black foreigners.

Mngxitama threatens that “they” will one day turn against whites and will blame the white minority for “their” poverty. He says the looting and riots are a dress-rehearsal for the civil war against whites. Malema encourages his “African brothers and sisters” to redirect their anger towards the “owners of wealth – the white, monopoly capital”, while Magashule denies xenophobia is the reason for the riots because whites aren’t attacked.

“Murders on farmers are three times greater compared to murders on the average South African,” says Mr Meintjes. “Many farm murders can be attributed to the irrational hate for white people preached by these so-called revolutionary groups.

“Resistance against these groups’ ideologies and physical assaults are of the utmost importance to TLU SA,” he says. “Because the irrational ideology is part of the attack one cannot oppose it as you would oppose any other assaults.”

TLU SA’s Stop the BLF campaign is not aimed at only one person, but at an irrational revolutionary ideology which promotes hate and violence against white people.

TLU SA has a five-point strategy to withstand the attack:

Live in peace with South Africans who do not support the irrational ideologies. Build bonds with South Africans and find solutions to cure this debilitating illness together;
Influence those who subscribe to this ideology to not get caught up in it. We use our unique positioning in rural areas where the revolutionary ideology is festering, spreading a positive message;
Because an ideology based on hate is not allowed under law, we make use of all legal remedies applicable to withstand the drivers of these ideologies;
TLU SA strengthens our safety structures to stop those already putting the racial hate ideology into acts; and
TLU SA shows the irrational revolutionary thinking to the rest of the world and encourages international pressure against it.

Magashule insinuates that xenophobic violence should be turned against whites 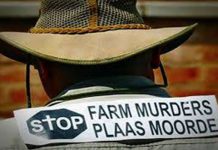