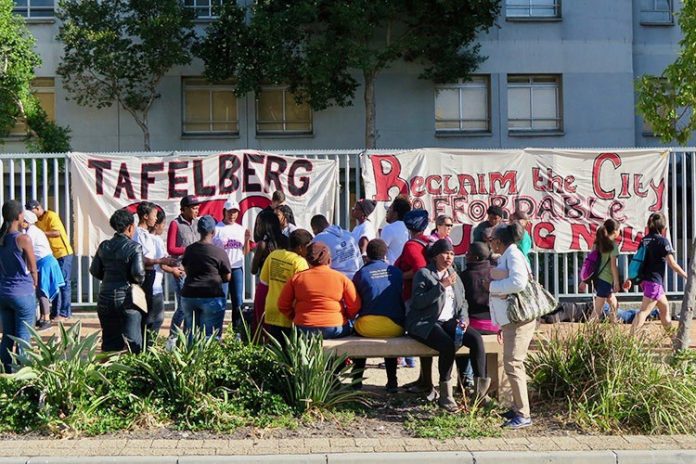 The Western Cape Premier’s office has hit back at the National Treasury over its comments about the decision not to build affordable housing on the Tafelberg school site.

In a news release accompanied by a copy of a letter addressed to Lungisa Fuzile, Director-General of the National Treasury, the office of the Premier sought to correct a “misunderstanding” by the Treasury of the reasons for the decision.

Earlier this month, the Treasury released a statement expressing “concern” about the sale of the Tafelberg property in Sea Point to the Phyllis Jowell Day School Trust, saying this was “in stark contrast to repeated government policy statements on the importance of re-integrating urban areas in South Africa.”

The Treasury said cities like Cape Town were “deeply segregated, exclusionary environments” and called on “all spheres of government to work together” to reverse the legacies of apartheid.

“The National Treasury has given no instructions or guidance to the province that could be construed as requiring it to sell this land purely for financial gain or as a revenue-raising measure,” it said.

The money from the sale of the site is to be used towards upgrades to the Western Cape Government’s building on Dorp Street – a plan which the Treasury called “inappropriate.”

In his letter to Fuzile, the Premier’s Director-General Brent Gerber said the Treasury had directed provinces to “cover any shortfall.”

But, he said, “This by no means implies… either that it was the imperative that drove this process or that the Cabinet in any way disregarded the need to give due priority to our current housing development programmes in reaching the decision it did on this site.”

He mentioned housing projects worth R3.2 billion, including 40,000 “potential affordable housing units,” the Better Living Model Game Changer and a memorandum of understanding between the Departments of Human Settlements and Public Works identifying “pockets of inner-city land” to be used for affordable housing. The Better Living Model Game Changer is to bring 6,600 mixed-use, mixed-income units to Pinelands and Belhar.

He said after considering such projects, receiving “legal advice” and addressing “affordability risks” as well as “fiscal constraints”, the Western Cape government had “resolved that the Tafelberg site is not ideally suited to affordable housing, especially as the state subsidy cannot be utilised there under current national policy.”

Tafelberg does not fall within the city’s restructuring zone, which means that the national subsidy does not apply. However, as GroundUp reported in March, the entire City of Cape Town, including Sea Point, is be declared a restructuring zone. This would mean national subsidies could be applied to affordable housing developments, like that proposed at Tafelberg. The Treasury has said there are “no significant obstacles to using available national housing subsidies, including for social housing, on the Tafelberg site.”

Gerber said that he hoped the cause for affordable housing would “not be distorted for the benefit of political or other agendas going forward.”
By Trevor Bohatch