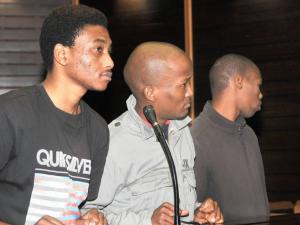 Durban – There was a moment as Beth Bucher was being beaten and choked when she recognised the glove on her attacker’s hand as he forced it down her throat. It was the same kind her partner, Dan Knight, who had just been killed with a hammer, bought for his staff.

In the lounge of the couple’s Underberg farmhouse, Knight, 55, had been beaten with a hammer and as Bucher, 60, was dragged from the bathroom to the bedroom, she saw his lifeless body on the floor.

This emerged in the Pietermaritzburg High Court on Wednesday where the suspected killers are on trial for Knight’s murder.

Tsepiso Ramonyane, 20, Bonginkosi Nyawose, 33, and Happy Gcina, 24, have all pleaded not guilty, saying they were not at the scene on October 17.

It has not emerged in court yet if any of the men worked for Knight.

Although only three men are on trial, Bucher said she thought five men had been on the farm that night.

She told how her hands and feet were bound, a gun was shoved down her throat and a surgical glove from her first aid kit was tied around her nose and mouth.

The couple had a firewood business and had lived on Outlook Farm for 18 years. Since the attack, Bucher has left the farm and is living with her children.

At 6.30pm, on the night before Knight’s birthday, the couple were having supper in the lounge, while discussing what to prepare for their guests the next day.

Bucher heard a noise and the scullery door opened.

Men wearing balaclavas and dark clothing ran in, one carrying a spanner and a firearm.

“A man jumped on top of me and pushed me over. As that happened, I saw three other people jump on to Dan and one of them shouted: ‘Dan Knight, we are here to kill you. We are here to kill both of you. You must give us your money and firearms.’ Dan called out, in Zulu, and they were speaking in Zulu.”

They kicked Knight, demanding money. Bucher’s hands and feet were bound with cable ties. A curtain tie-back was tied around her neck and pulled to her ankles.

The men hit Knight with the weapons they had, including a knife and hammer.

He offered to write them a cheque for the amount they wanted, which angered them, and they kicked him again…