The FF Plus views the government’s revocation of the state of drought disaster as a slap in the face of commercial farmers who work tirelessly to ensure food security in South Africa.

The state of drought disaster was declared on 4 March 2020, and has since lapsed unnoticed because the government failed to extend it by 4 July 2020.

The head of the National Disaster Management Centre, Dr Mmaphaka Tau, said that he consulted with provincial disaster management centres and decided to revoke the state of drought disaster ‘after reconsidering the extent and seriousness of the drought conditions’.

In a written reply to the Portfolio Committee on Agriculture, the government admitted that it only offers support to the farming community if it relates to ‘market access and certification’.

A second wave of destruction is about to hit South Africa seeing as farmers cannot produce enough food due to the drought that has persisted for years and they can also not rely on a government that is indifferent to such a serious drought and the possibility of a food crisis.

The ANC government is taking the agricultural community for granted and does not seem to realise that food security is in serious jeopardy if farmers do not get the support and drought relief that they need from the government.

The FF Plus will make an official enquiry into the matter and will demand that all the information used to make this decision must be submitted to the Committee. 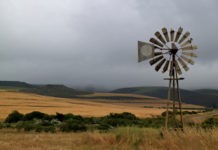