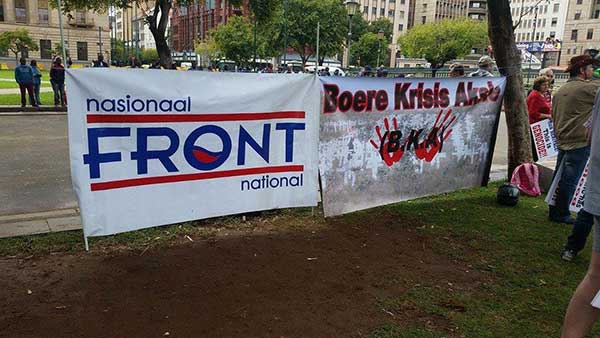 The fact that a number of organisations who usually agree on few things, managed to forget minor differences, join hands on the spur of the moment and stage countrywide protest actions this morning, serves as undeniable evidence that the unprovoked and racist attacks against our heritage sources is a matter rising high above party politics. Is a matter of national pride and dignity. The fact that we collected 11500 signatures of protest in little more than 36 hours speaks a language of its own.

In order for us to provide evidence of our existence as a nation to the international world, we need to give evidence of where we come from and who we are, and in this our monuments and statues are of immense importance to us. In particular in giving evidence of our quest for self determination, which manifests in two ways:

It was determined at the Kodesa agreement, more than 20 years ago, already, that self determination would be granted to us in terms of article 235 of the constitution of South Africa. Assurances were given and promises were made by the ANC.

It is now evident that the government of South African has no plan at all to honour these assurances, nor to even talk to us about our quest for self determination. In actual fact, the Afrikaner nation is being marginalised and cast out more and more every day. We are being made strangers in our own country.

This leaves us no option but to turn to the International community and call on their conscience to come to our aid. To this purpose, Front National recently registered with numerous bodies of the United Nations as representative of the Afrikaner/Boer people and is currently listed as consultant with the UN and UNPO on matters regarding our nation. This is a status enjoyed by no other organisation or party.

We look forward to presenting our case later this year at a meeting in New York and towards the end of the year in Geneva and The Hague.

It is therefore not difficult to imagine the level of shock when we learned that, despite endless fundraising campaigns and numerous undertakings and promises, never in 2 decades did any political party or civil rights organisation do the most basic thing. Nobody bothered to ask the UN to send a commission of enquiry to look at the question of farm attacks, poverty, racism against white South Africans and our rejected right to self determination.

We can but ask: Afriforum – you WERE registered with the UN. You let that expire. Why did you never do anything? Why did you not do anything? Why? Why? Why give us hope while we had to pay with the blood of our farmers and the hungry eyes of the children of our nation? If there is an answer, we would like to hear it?

It was such an uncomplicated process. Within a few weeks after Front National lodged this plea, we have learned that an American delegation under an esteemed academic will be visiting South Africa within two months to investigate these matters. Appointments have already been made to introduce these delegates to survivors of farm attacks, close relatives of victims, to show them the white squatter camps and the poverty there and to take them to our vandalised and politically raped national resources.

Why only now? Where were the representatives of our people for more than 2 decades?

This morning the Afrikaner nation leaves the darkness of its cage. This morning this nation raises its head and takes a first step towards a new future, one which we are going to build for ourselves in this country. We need no more alms and crumbs off the table from the ANC! We do not apologise for being here. We need nobody’s forgiveness for anything any more. We are here because we belong here…accept that now, for you cannot change that, mr Zuma and mr Malema and every other self-declared enemy of the Afrikaner nation.

363 years ago to this day, within walking distance from where we are standing a little boat landed. Aboard that boat was Jan van Riebeeck from Culemborg in the Netherlands, a naval surgeon by profession, his wife Maria de la Quellerie, a refined French lady and their little son Lambertus. And other men and women who, undoubtedly without intention, on that day started a new nation. And that nation, along with the descendants of European people from England and Scotland and Wales and Ireland and Germany and France and Portugal and Greece and Italy and Scandinavia built and worked and applied themselves and contributed immensely to the existence of this country. We became a nation.

This scandalous and utterly racist attack on an entire nation through the destruction and vandalising of our monuments is undoubtedly the end result of the offensive and completely irresponsible statements made by president Zuma in January of this year when he claimed that all the problems in South Africa started with the landing of Jan van Riebeeck on April 6 ,1652.

This day, April 8 1652, 363 years ago to the day, Jan van Riebeeck and his people started working here at the Cape. Their first deed was to plant, and then to build. And in the course of more than 3 and half centuries since that day, their descendants, and those of every other European who came here, never stopped cultivating the soil and building and creating and constructing. Therefore the destruction of our national heritage resources is such a matter of urgency to us, because what the Economic Freedom Fighters of Julius Malema and the ANC Youth League is guilty of, is nothing but cultural terrorism.

Front National already made an International affair out of the destruction and vandalism of these sites. Through correspondence with the Universities of Oxford and Cambridge, in particular about the Rhodes statue and the Rhodes scholarships we asked for these institutions of learning to put pressure on the British government to intervene in our cause for protection of our heritage sites. A similar appeal was directed at the University of Leiden in the Netherlands, with particular reference to the Kruger statue in Pretoria, and the van Riebeeck statue in Cape Town. As we are gathering here this morning, our representative in The Hague is presenting an urgent letter to Paleis Noordeinde at the office of the King of the Netherlands.

In this letter we remind His Majesty King Willem Alexander of the following:

1) That it was as a result of the Dutch settlement at the Cape that we are here today and it is that historical act which is abused by Jacob Zuma and his ANC Youth League to destroy our heritage and fuel the flames of hatred against us.
2) We remind His Majesty that it was His great-grandmother, the young Queen Wilhelmina, who sent a ship to transport the elderly pres Kruger to Europe in order to prevent him from becoming a prisoner of War more than a century ago. He eventually died in exile in Europe.
3) We remind His Majesty that these two statues of Jan and Maria van Riebeeck was a gift of the Netherlands to South Africa and were unveiled by prince Bernhard, the grandfather of His Majesty, in 1952. The demand for the removal of such monuments is a diplomatic insult by the ANC Youth League and the governing party against the Kingdom of the Netherlands and the Dutch people as a whole and we condemn that in the strongest of terms.
4) We remind His Majesty of our ties of blood, culture and heritage and we plead with His Majesty to intervene on our behalf for the preservation of Western civilisation in South Africa, for we are the last European front left.

We have already learned that the statue of British Colonialist Statesman, Cecil John Rhodes, at the University of Cape Town, is being prepared for removal. That monument is a National Heritage Site symbolising the contribution of the English speaking population. Act 25 of 1999 – the Act on conservation and preservation of heritage resources, clearly states that the protection and maintenance of national heritage resources is the responsibility of the government. We call on government to own up to their responsibility now, to protect our heritage resources and to take criminal action against the people who vandalises and destroys it.

Heritage conservation is a national affair. It is not a political issue. It was made into a political affair by the EFF and the ANC Youth League when they burned a statue in Uitenhage and vandalised the statue of Paul Kruger on Church Square in Pretoria. And when, over the Easter Weekend, the EFF destroyed a statue in Port Elizabeth of a man giving his horse a bucket of water, the EFF scraped the barrel of civilised conduct. That statue was erected in 1906 to commemorate the suffering of animals during the Boer War. How in the name of sanity can any sensible person link that to apartheid????

The funeral of Paul Kruger, 110 years ago, united a nation in its grief. The Van Riebeeck Festival in 1952 united a nation in the joyous celebration of its hour of birth. Now, in 2015, we stand here in Cape Town at the feet of Jan van Riebeeck and in Pretoria at the feet of Paul Kruger as a nation on the brink of unity again. And this is the point where I offer my hand, on behalf of Front National, to any organisation and individual who agrees with me that we need to resist the destruction of our heritage with everything we can muster,…take this hand and let us move forward, together, in unity towards freedom and justice!