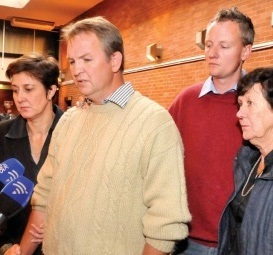 Pietermaritzburg – The day before three members of the Schutte family were brutally murdered by a trusted employee and his cohorts at Richmond, their son, Stefan, had offered the killer help to further his studies.

Stefan Schutte, who found his parents, Ekard Schutte , 76, and Elizabeth Schutte, 66, and brother, Lutz Schutte, 33, stabbed to death at Springfield farm in KwaZulu-Natal on 2 March, said on Monday he’d like to ask Zamo Maduna, 19, who’d worked for them, why he murdered his family.

“I just can’t comprehend how this can be done.

“How can you murder people you worked with and who trusted you? He was part of our family,” Stefan Schutte said at the KwaZulu-Natal High Court.

“It’s madness. You can’t describe it,” Schutte said, speaking about the 1 March murders.

“There is nowhere you can go. Life carries on but the pain is there every day,” he said.

Supported by his wife Moonyeen, mother-in-law Nina Lowe, and his brother Matthias, he spoke out publicly for the first time about the crime.

His family members were killed after Lutz flew out from Germany for their father’s 77th birthday celebration that weekend.

The family was at court for the anticipated sentencing of Maduna, Siphesihle Ngubane, 20, and Lindokuhle Khoza, 18, who pleaded guilty to the three murders within weeks of being arrested.

The case didn’t go on after it emerged that a pre-sentence report alleges Ngubane had suffered from “delusions” in the past.

Defence attorney Zina Anastasiou and State advocate Candy Kander told Acting Judge Louis Barnard they both agreed that justice demanded that Ngubane be interviewed by a psychiatrist before the case continues.

Stefan Schutte said he’s compiled an eight-page victim impact statement detailing the effects the family slaying had on him and the rest of his family.

That report will be presented in court when the trial resumes.

“The biggest problem I have is that these guys have now pleaded guilty but they would not have done so if they had not been caught by the police… There is a lot of anger that my parents had to go through something like that.

“I don’t think anyone deserves to be treated like that… It’s just horrible,” Stefan Schutte said, his voice trembling.

He said what made it worse was that one of the killers was someone they trusted.

Schutte said Maduna had started working for them two years earlier. The day before the murders Stefan spoke to Maduna about his aspirations.

“He said he’d like to work in an office one day. I said he should see me on Monday and we could look into some courses and how we can help him. Then he goes and murders my family,” he said.

“It’s madness. You can’t describe it,” he said.

He said the killers could have stopped after murdering his father, but they went on to kill two more people…