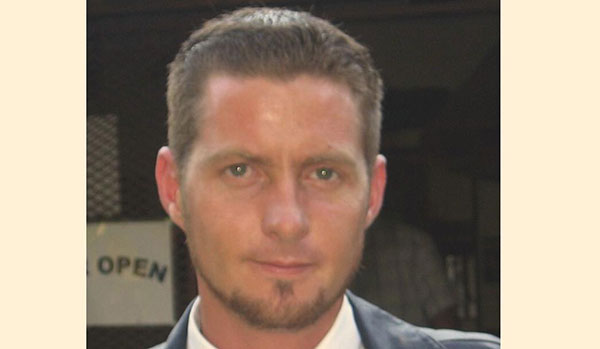 Braam Blignaut (35), a foreman at Tharisa mine near Mooinooi in North West, worked night shift when he got a message from his wife, Izulda, early Friday morning July 10, 2015 telling him she was afraid because the dogs at their home on a smallholding in the Buffelsfontein area were barking veraciously.

“His work is about 5 km from their home. He got in his car about 02:00 and rushed home,” Blignaut’s mother, Gerda Steyn told Maroela Media.

Two suspects waited for Blignaut outside the house and on his arrival pointed a gun at him. They forced him into the house where they tied his hands with Izulda’s belt behind his back. “They then took a flag in my son’s house that they torn in pieces, ripped Izulda out of bed and tied her hands with the strips” Steyn said.

Three of the couple’s four children, respectively two, four, seven and 10 years old, woke up during the chaos. They were all detained for about an hour in the TV room while the men searched the house for valuables.

Blignaut could understand the men’s language, as he works at the mine. He could hear the men tell one another that they would rape Izulda. He managed to untie himself and told Izulda in Afrikaans to run out the back door to call for help from the neighbors whom they rented the house from.

Izulda, with her hands still tied ran outside. Blignaut got hold of a machete that was on the wall as decoration, and hid behind a wall in the kitchen waiting for the attackers.

“Both attackers chased Izulda. Blignaut struck one of them in the face with the machete at the kitchen door. The attacker, however, returned and fired shots at my son, in front of the children. He was shot three times in the chest,” Steyn said.

One of the suspects allegedly shot at Izulda and hit her toe. She managed to reach their neighbors who called for help.

“Then I got the call about 03:30. Braam called me and said ‘Mom, I love you, I will not make it, I’ve been shot and I don’t feel my legs,” an emotional Steyn said. Steyn and her husband, Andrew, live about 18 km from the Blignaut couple and immediately rushed there. “I was out of my mind. I just kept praying to God to save my child’s life.”

The attackers meanwhile fled by foot from the scene with two cellphones, R250, a camera and a necklace that Izulda’s late mother had given her.

Blignaut was initially taken to Brits hospital where he was transferred to George Mukhari Hospital in Ga-Rankuwa. It was found that the nerves in his back were severely damaged and Blignaut probably might never be able to walk again. His condition was stable on Monday.

“My child’s right to be a father and a man was taken away for R250 and two cellphones. I want the whole world to become aware of what is going on in this country,” Steyn said.

The Mooinooi police are investigating the incident. Maroela Media contacted the police for news on any progress with the investigation and is still awaiting feedback.