A Police Special Joint Task Team composed of various Police Units have launched a massive manhunt on a group of unknown armed suspects who attempted to rob a Security Cash-in-transit car at Steelbridge in the Sekhukhune Policing area outside Burgersfort.

It is alleged that a group of suspects travelling in three cars, collided with the armored vehicle which led it to loose control and swerve out of the road, and the suspects jumped out of their cars running towards the cash-in-transit vehicle. Before the suspects could attempt to gain access to the cash, a Police car arrived and they started shooting at the Police while they were running away. SAPS members retaliated. The suspects robbed a traffic officer who was in the area, conducting point duty, of his firearm and hijacked a passing vehicle. They fled the scene.

Police recovered the hijacked car abandoned a few kilometers from the scene. The robbers’s cars were also found abandoned with a number of items including a generator, grinding machine and a firearm.

During this incident there was no fatalities or injuries and no money was robbed. Only the Traffic Officer’s firearm was robbed. Police investigations are still continuing. 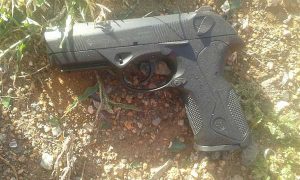