It is very clear from any “John Citizen’s” perspective that, after more than 2 decades of political change, and moreover against the current impact of the global Covid-19 pandemic, things in South Africa are more likely to get worse before improving.

“Slowly Boiling the Frogs” as per Ramaphosa

Against the background of the BBBEE program, minorities of specifically the White, Brown and Indian population groups have been targeted for exclusion from any meaningful prospect of equal employment- or business opportunities. With the current 114 race-based laws implemented by the government to curb the (mainly) White minorities’ privileges, nothing much in terms of the country’s situation has changed to a positive effect, or as was probably anticipated. This underlines the clear message aimed at whites on how the government is to deal with them, namely the much controversial use of the metaphor by Ramaphosa of “slowly increasing the heat to boil the frogs (the whites)”.

Awakening of the Minorities

Recent events clearly validate that there is an awakening among the minority groups, specifically across the Brown and White population. With an increased number of anti government sentiment movements and -organizations are sprouting up all over, it is evident from this phenomenon that the members of the minority groups are increasingly aware of, and in protest against their dire situation in South Africa, where their cultural-, religious-, language- and ethnic standards, values and morals are completely disregarded by the SA ruling regime.

So, dear reader, what makes the ULA’s process any different from other self-determination movements’ process?

The United Liberty Alliance is a non-profit minority rights organization, ultimately consists of a legal body, and acts as umbrella organization for all minority groups that promote the same primary goal, namely self-determination.

No other movement or political party has to date followed the only internationally-acknowledged legal process, yet some project to their followers that “secession from SA” will be possible. Since 2014 the ULA has diligently followed the internationally acknowledged legal “De Jure” process for self-determination, referred to as secession (withdrawal from a mother country).

Will Secession be Successful?

Historically, there were only 95 countries in the 1950s, whereas currently there are 195 countries globally, of which several that emanated from legal self-determination processes.

Examples of countries which have successfully seceded:

The important, internationally required steps already taken by ULA towards the successful secession of a new country for oppressed minorities includes:

In summary, no other organization has done the ground work in terms of the accepted international process for secession such as ULA has been following over the past 6+ years. As it is the only accepted process of the international community, no “internal” secession will be successful in being recognized internationally, therefore would be destined for failure.

This is a crucially important aspect to keep in consideration regarding any self-determination goal, and this fact is often not communicated by these groups to their supporting public. Simply deciding to identify a specific area in a claim for self-determination of a group, without following the due process, is likely to, at best, retain the intended area / region as subjective to the mother country’s rule of governance.

The minority groups were identified by ULA through the Quantifying and Marginalization Process (2) and includes:

The colored areas of the map image below indicate the areas earmarked for inclusion in the new seceded country: 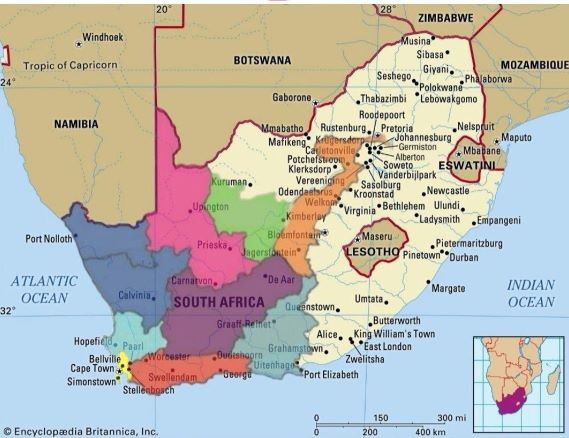 The process of secession is duly followed against the background of the following broad spectrum of provisional laws and regulations pertaining to self-determination:

The current step ULA is following is to obtain the required 2 million YES-“mandates” in order to enforce a democratic referendum, that in case of a majority (50% + 1) YES”-vote would ultimately lead to finalization of the secession process.

Readers are invited to visit our website on https://ulacongress.com for the very transparent details of both the ULA itself and the legal secession process.