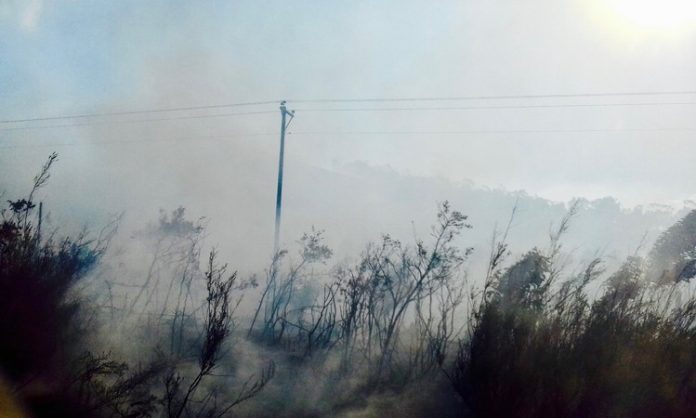 About 200 people at a forestry plantation in the Eastern Cape were evacuated to safe places on Wednesday. This, after a raging veld fire burnt down the farm factory and plantation and was blowing towards their houses.

The workers and their families who live at Longmore Sawmill, near Port Elizabeth, have spent two days sleeping in the Thornhill Community Hall. They were evacuated on Wednesday by a combined team of the Kouga Municipality assisted by the police and the local business community.

The cause of the fire is still not known. However, the raging fire has spread and by Thursday night had crossed the Van Stadens River into the Nelson Mandela Bay Municipality where firefighters were trying to contain it.

Executive mayor of Kouga Municipality, Elza Van Lingen, explained: “We don’t have any idea as to the cause of the fire. We had six fires in our region in the past two days but the worst was the one that destroyed properties at Orange Grove.The fire had also threatened farms between Humansdorp and Oyster Bay.”

“Our firefighters did their best to save life and properties,” she said. “We are in desperate need of food and drinks, as well as blankets for the people in the hall. Eyedrops and drinks are also needed for the firefighters who will be working throughout the night. At Orange Grove four farm houses have been burnt down. The Longmore fire has crossed the mountains and is now burning on Nelson Mandela Bay Municipality’s Elandsriver Road.”

Many people who slept in the Thornhill community hall were concerned about their jobs. They however commended the services they got from the Kouga Municipality, the police and local businesspeople.

Enslin Mongo, 29, lives at Longmore forestry farm with his girlfriend, Bianca Koert, 24, and their three children. Koert works at the wood sawmill while Enslin is a contract worker in the health and safety division of the forest plantation. They have been living at the plantation compound for more than eight years.

Enslin said, “It all started with an explosion in one of the overhead electricity cables followed by a huge fire that engulfed the plantation. The fire was being driven by gusty winds and it was heading toward our houses. There was also another fire that simultaneously appeared at the neighbouring Sibabili farm. We feared that the two fires could trap us in between. The municipality and the police quickly dispatched many vehicles to evacuate us. Some local businesspeople also helped greatly with their vehicles and other needs. We did not carry anything with us except our identification cards and small valuables.”

“We are safe and comfortable in this hall and we have received information that our houses are also safe. Our main worry is that other sections of our factory and the plantation were burnt. We were working as contract workers and we have been with the company for many years. Our fear is that if the company decides to retrench us, where shall we go? And most of the workers are not skilled and educated. I am having sleepless nights because of that. Our jobs are not safe.”

Mlekelelo Khanyile, 49, also expressed his anxiety about the future of his job. The Pietermaritzburg-born forest chainsaw operator said: “I am just desperate because our jobs are no longer safe. Our future is not guaranteed. I come from KwaZulu-Natal and it will be very difficult for me to just go back home with no money. I hope the company will continue operating and allow us to stay in our houses.”

Nopasika Antoni, 33, has been living at the Longmore forestry with her husband since 2011. They have a one year-old baby. “I was terrified with the sight of the fire. I have never seen such a life-threatening scene in my life. I hope the company would recover quickly from this disaster so as to avert job loses,” she said.

Nelson Mandela Municipality spokesman Mthubanzi Mniki confirmed that no injuries have been reported so far.
By Joseph Chirume