A tragic accident which claimed the lives of two men aged 30 and left one seriously injured occurred between a Train and a Tip Truck at a level crossing from a Municipal Dumping site on the afternoon of 5 April 2019, in Berlin.

According to the reports, the passenger train was en route to East London when it collided with the Truck which was carrying mud rocks. Both the driver and his assistant died at the scene allegedly as a result of the collision.

During the accident, the 40 year old truck driver also suffered serious injuries and was rushed to the nearest hospital for medical attention. Circumstances surrounding the actual cause of the accident are currently unknown, however a case of Culpable Homicide has been opened for investigation.

The Eastern Cape Provincial Commissioner, Lieutenant General Liziwe Ntshinga personally attended the scene of the accident and expressed sincere condolences to the families and relatives of those involved in the accident. The names of the deceased persons cannot be revealed at this stage until the next of kin have been officially informed. 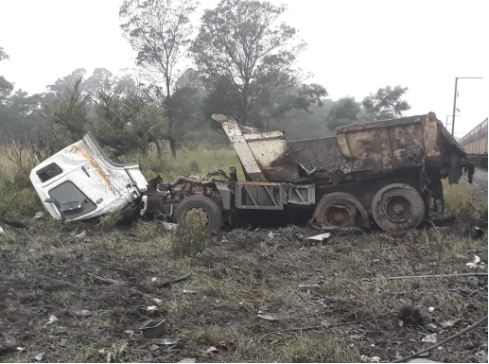