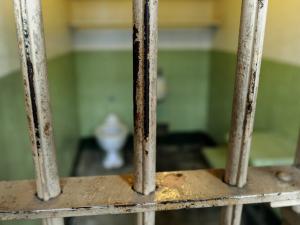 April 09 2014 – Perceptions that foreigners are the main cause of South Africa’s crime problems could be a myth. This is according to a report on the state of South Africa’s prisons, released by the National Institute for Crime Prevention and the Reintegration of Offenders.

The report provides insight into the race group and gender composition of the prison population, as well as the most common types of crimes men and women are jailed for.

The study highlights trends in sentences, and how the cost to imprison a criminal exceeds many families’ household incomes.

The report, compiled by researcher Regan Jules-Macquet, shows that the “anecdotal belief” that many criminals in South Africa are foreigners “does not appear to be true”, with foreigners making up just 4% of the 112,467 sentenced prisoner population. This is slightly higher than the 3.1% of foreign nationals in the general population recorded in the 2011 census.

“Unless … for some reason, foreign nationals are committing offences that do not result in incarceration, it appears that this anecdotal belief is unfounded,” the report says.

The research, relying on the latest available information from the Department of Correctional Services, also shows that only 2% — or 2,663 — of sentenced prisoners are female, compared to 109,804 male prisoners.

Fifteen women were imprisoned for sexual offences, compared to more than 18,000 of their male counterparts.

A surprising statistic shows that 23% of offences by children under 18 — who are held in secure care centres rather than prisons — were sexual crimes. “Sexual offences for children under the age of 18 years amount to 23%. This is much higher than for youths (18 to 25 years old) and adults (13% and 16% respectively). It is unclear why a larger percentage of children are detained for sexual offences.”

According to the report, the sentenced prisoner population is 79% black, 18% coloured, 2% white and 1% Asian. There is a disproportionately high number of coloured offenders and a low number of white offenders compared to South Africa’s demographics, with each of these groups making up 9% of the national population. […]
South Africa Today – South Africa News