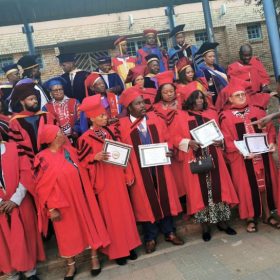 The school was established in 1996 in Ladysmith, KwaZulu-Natal, by Professor Sithembiso Calvin Shabalala. Shabalala, who is the Dean in the faculty of Theology and Religious studies.”When I started at the school I realised that traditional healers weren’t respected and they have no proper documents that prove and attest that they’re really healers,” said Shabalala.

“We then saw the essence of training them with herbs, inventing, cultivation and management of herbs. However, we struggled to get accreditation and then we requested Interdenominational school of theology and project to accredit us in 2015. That is when we started training them in the field of African medicine because I am a traditional healer,” said Shabalala.

The school has five facilitators who are all traditional healers. Upon completing their studies the students get medical certificates, referral books that will be used to refer patients from the healer to the clinic or hospital. Shabalala noted that the graduates also receive practice numbers and medical certificates.

One of the graduates, Doctor Mpho Malatji, said research had discovered that much of the indigenous knowledge in cultivation, harvesting, preparing, storing and using African plant medicine (Muthi) had been lost due to the passing on of the knowledge bearer before they could teach others.

“This has left a big void in the African medicine sphere, thus, opening a door for opportunists, fraudsters and self-proclaimed miracle workers, who have defrauded unsuspecting users thousands of rands. The motive of the enrolment and undertake the study is to mitigate unconsecrated practices that have brought a dark cloud upon African medicine and to preserve the indigenous knowledge and its uses in African medicine by researching and documenting it in line with accepted scientific methods,” he said.

Malatji said institutions such as Mhlabuhlangene School of African Medicine bridges the gaps that students of African medicine face and ease their process of research and documenting.”The school gives students an opportunity to explore the world of African medicine in a safe and secure environment. This environment creates a strong foundation of knowledge, confidence and equips students for challenges later in the student’s life,” he explained.

Another student, Dr Sefadi Mohami, said the institution had given traditional healers their dignity.”Through our practice numbers, we are able to offer medical certificates. The school is not just mentoring or coaching students but also training them by giving out assignments as there is a scientific part of the herbs which is not part of what a healer does while in training at the initiation,”said Mohami.