As the global Covid-19 pandemic continues to restrict international travel, many wanderlust travellers around the world are craving their next trip. Wouter Vermeulen, General Manager Southern Africa, Air France KLM, notes that while we are all being responsible citizens practising social distancing, people across the world are finding creative ways to bring the world to them. “During this time of lockdown we have seen people embracing virtual travel to their dream destinations. And while it is no replacement for the real thing, it helps keep that travel dream alive. Another way we have seen people bringing the world to them is through food! Seeing all of those posts from people baking bread is enough to send you into a day dream about indulging in a freshly-baked baguette as you picture yourself strolling through the streets of Paris,” Vermeulen says.

So, what else could bring France a little closer to you until it is safe and permitted to travel again? Air France and Atout France, the French Tourist office in South Africa, have teamed up with some of South Africa’s greatest culinary maestros to share some traditional French recipes to help bring the magic of France into your own home.

Jenny Morris isn’t one to shy away from a challenge – and this recipe is worth every bit of preparation. ” For me, it all started with the French kitchen. The father of French cuisine, Georges-Auguste Escoffier, is my hero,” Jenny says. The chef adds that this dish is inspired by her love for two French staples. “I have eaten some of the best lamb and bread in the world in France so I decided to marry the two in one dish.”

Method:
Make slits in the lamb and insert the garlic and rosemary into the slits
Make a paste with olive oil, salt, pepper, ground cumin and lemon juice, rub all over the lamb
Heat a large frying pan and sear the lamb all over, remove from the pan and cool
Place the prepared leg of lamb onto the dough and enclose it by wrapping the dough around the lamb and pressing it together to seal
Let the bone stick out
If you wish you can decorate the wrapped lamb with dough off-cuts, fresh rosemary and half heads of garlic
Place the lamb onto a baking tray and bake at 180°C for 20mn, then turn the oven down to 150°C and bake for 3hours
Take the lamb to the table and break it open, remove and carve

The dough for encasing the lamb

Method:
Place the flour, salt, sugar, rosemary and yeast into the bowl of a food processor, attach the dough hook and, with the motor running slowly, add the water and knead the dough for 10 minutes or until the dough is smooth and elastic to the touch.
Place the dough in an oiled bowl, cover and let it rise to twice its size
Now punch the dough down and roll it out on a lightly floured surface

Local celebrity chef Nataniël is incredibly proud of his French heritage – and it’s something that is very much part of his everyday life. “The first time I stayed in France for a really long period of time, I spent all my time in Nantes with my family and I discovered the joy of simple food made with good quality produce. The people of that region love using apples in sweet and savoury dishes which is what inspired this particular dish. I now serve it all the time and it also features three of my favourites ingredients: baguette, smoked salmon and Calvados!”

Method:
Brush slices of baguette on one side with grapeseed oil.
Place on baking sheet, brushed sides down.
Bake in oven at 180˚C until golden brown.
Remove from oven and turn over.
Whisk up a vinaigrette using the olive oil, sugar, mustard and Calvados together and season with salt and pepper.
Place salmon on top of each slice of baguette.
Dip thin slices of apple in vinaigrette and place on top of salmon.
Top with caviar and garnish with dill.

Tumi made headlines last year when she won the first season of The Taste Master which saw her become the resident chef on SABC 3’s popular magazine show Afternoon Express and has always been a fan of French cuisine. “I’ve always been curious about French cuisine and I understand why the cuisine has been so celebrated. A lot of cooking is rooted in French techniques and I fell in love with this during culinary school. One of the first things I learnt to make was quiche and years later it is still one of my favourite things to make so I am excited to share this with my own little spin, of course.”

Method:
To begin, preheat your oven to 200°C.
Add your grated potatoes into a large bowl and follow with the olive oil, ½ tsp salt, ¼ tsp pepper and pecorino romano and stir through.
Using your fingers, fill your baking dish with the potatoes, I used a round tart pan. Start from the middle and working your way out making sure every bit of the bottom and sides is thoroughly covered. Ensure there are no gaps as this forms as the base of your quiche.
Bake the crust for 15 minutes, or until the potatoes are just cooked but not brown. Remove from the oven and set aside.
Reduce your oven temperature to 180˚C.
For your filling, whisk together the eggs and milk before adding the onions, garlic, bacon, cheese, remaining salt, remaining pepper and basil.
Slowly pour the egg mixture over the potatoes making sure ingredients and evenly distributed. Carefully place the halved tomatoes onto the mixture, ensuring that the inside part faces upwards.
Bake the quiche for 30 minutes, or until the eggs are set and the potatoes are nicely golden brown.
Enjoy warm or cold. 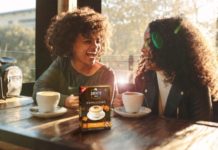 Society Cappuccino on a mission to drive meaningful connections, as loneliness grows 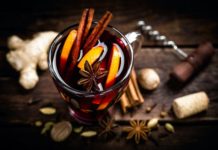 Add zing to a winter’s evening with a spicy cocktail 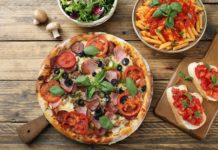 Comfort yummy for the tummy!