When we think of Anthony Oseyemi, there are a few words that come to mind. Talented, entertaining, authentic and honest are just a few that describe him best.

Born and raised in the United Kingdom, Anthony has built a career in South Africa and has since moved into the international film and television scene where he continues to excel.

But it’s his latest venture that has everyone talking, with the release of a brand new single, debuting in the midst of what we would call a very important period.

He describes it as an expression of how he feels, but the important underlying message reads that we need to confront things in society that have been swept under the carpet in the name of progress.

“Everything is so full of possibility. Change to me means, not doing the same thing over again and expecting a different result.” he adds. 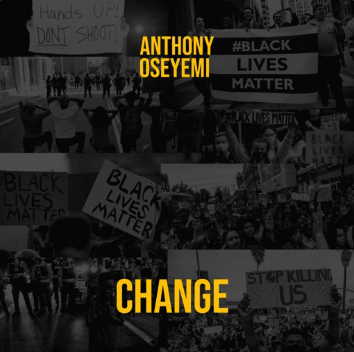 When it comes to finding the inspiration to write such a song, Anthony is in no short supply. He explains that the track was inspired by news events in relation to the student’s unrest because they were quite literally frustrated.

“We’re busy saying to them one thing is possible if you do this, while we do that.  You can’t say an example; you have to be the example.” Anthony explains.

What goes into making a song, in such a short period of time? According to Anthony, you simply put inspiration and experience together. He believes that song writing is story telling with a hook.

As an artist, Anthony is very well-known across the UK, as well as Africa and South Africa in particular. Despite being born and raised in the UK, he relocated to South Africa later on in life and felt it was an important move not only for himself, but for his career as well. But staying true to his roots, he ensures people acknowledge his Nigerian heritage as well.

“I was familiar with SA and liked what I’d seen and experienced and some things just resonated with me. A change of location is always good for growth, you leave your comfort zone, you either sink or swim. Furthermore, I celebrate my Nigerian heritage in my name, in my writing, in my performances, and characterisations.” says Anthony.

As an actor, writer, musician and producer, Anthony boasts a diverse skill set which is currently being showcased on a Netflix Drama series, Agent, which sees him act alongside Khumbulani Kay Sibiya and Sisanda Henna. But what truly inspires him as an artist?

Anthony credits the great Denzel Washington as his main acting inspiration as he feels he perfectly encapsulates an era and embodies the total skill of an actor. Within the music scene he credits two particular artists, the late greats, Michael Jackson and Bob Marley and more recently Nina Simone, for her compositions which he describes as “delicious like honey mixed with vinegar”. He believes that she captures the human condition exquisitely.

Catch Anthony on an upcoming series called ‘Dead Places’, as well as a series called , which is said to keep audiences wanting more.

With all that is taking place during this time, we encourage those around us to spread love, spread kindness, and celebrate each other’s successes.

“It’s time to talk about it, that’s all there is to it.  ‘Necessity is the mother of invention’.” – Anthony Oseyemi.