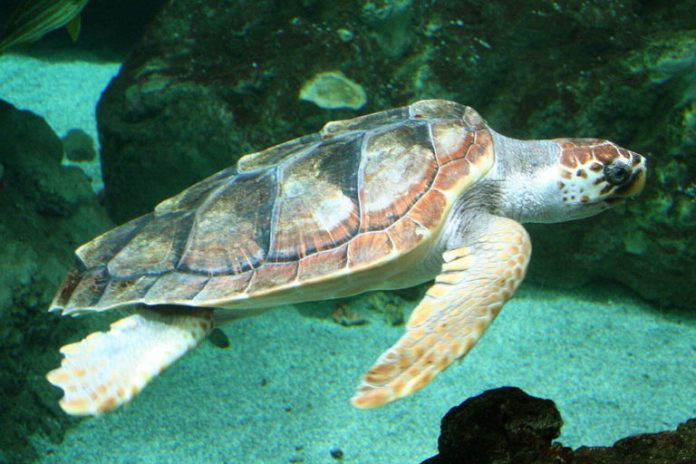 The Mediterranean island of Cyprus isn’t somewhere you might normally associate with record levels of waste. The mythological birthplace of Aphrodite, the ancient Greek goddess of love, Cyprus conjures images of white-sand beaches and shimmering blue seas.

But a new study — and lots of digging — has found that beaches in northern Cyprus have the second highest amount of microplastics among beaches studied across the world. Only one other beach, in Guangdong, southern China, has recorded greater microplastic levels, researchers say.

The Cyprus beaches that the researchers studied are crucial nesting sites for two species of turtles: green (Chelonia mydas) and loggerhead sea turtles (Caretta caretta). Both species are threatened, and their reliance on Cyprus’s beaches makes the high levels of microplastics there especially dangerous for the animals. Ingesting the tiny particles of plastic is an obvious threat to the nesting turtles and their hatchlings. The presence of the plastic can also raise the temperature of the sand, imperiling the outcome of the hatching.

“Although we knew the situation was bad and worsening, we were blown away to find only one site … worse affected than the beaches in Cyprus,” Brendan Godley, professor of conservation science at the University of Exeter, U.K., and a co-author of the study published in Marine Pollution Bulletin, told Mongabay in an email.

Digging in the Hot Sand

To measure levels of microplastics, the researchers collected more than 1,000 sediment samples from 17 beaches used by turtles as nesting sites on the north of the island. Godley described the work as backbreaking, and the subsequent lab preparation and analysis of the samples as painstaking.

The reason for such a high accumulation of microplastics on beaches is due to ocean currents washing the plastics to the shore, said lead author Emily Duncan, a recent Ph.D. graduate in ecology and conservation from Exeter. In the case of the northern Cyprus beaches, most of the microplastics originated from close by.

“Our analysis suggests most of it came from the Eastern Mediterranean basin. This is also true of the large plastic items,” Godley said.

Microplastics, defined as fragments less than 5 millimeters (0.2 inches) in diameter, enter the water in two main ways. The first is direct entry via industrial waste in the form of “nurdles,” the pellets used in plastic production, or microbeads or in industrial spills. The second is indirectly, by larger plastic pieces breaking down and fragmenting.

Most of what the researchers found in Cyprus were a combination of both direct and indirect sources.

“The majority of particles were preproduction nurdles and small plastic fragments,” Godley said. “The former are lost in transit or through poor waste management, the latter are broken down from the millions of big pieces out there. I think we are experiencing the tip of the iceberg for the latter.”

Beach habitats are important nesting sites for sea turtles to lay and incubate their eggs — a critical stage in the species’ life cycle. A sufficiently high concentration of microplastics in nesting sites could pose a significant threat to turtle hatching success by raising the temperature of the nesting site, the researchers say.

The plastics, especially darker pieces, heat up quicker than sand when exposed to high temperatures, potentially causing the nest temperatures to increase overall. Temperature determines sex in turtles: a higher nest temperature leads to a higher number of females being born, a phenomenon that Mariana Fuentes, a marine conservation biologist at Florida State University who was not involved in the Cyprus study, has called the “bachelorette dilemma.”

Such a skewed sex ratio has already been observed as a result of rising temperature due to climate change in northern Australia. In a study published earlier this year, researchers found that 99 percent of the green turtles they studied in the northern Great Barrier Reef, home to one of the largest green turtle populations in the world, were female.

Accumulations of microplastics in nesting sites could further “exacerbate the issue,” Fuentes and her colleagues wrote in a recent article in Current Conservation.

There’s no immediate evidence yet to suggest that the turtles in northern Cyprus are experiencing this skewed sex ratio, Godley said, but more research needs to be done.

“For the moment, we do not think these plastic levels are deleteriously affecting the nest but we need to find out at what level they will exert an impact,” he said. “We have just undertaken a global review of these levels on turtle nesting beaches with colleagues from over thirty countries and hope to get detailed experimental work undertaken in the coming year.”

Although there has been extensive study on the effects of larger pieces of plastic waste, the impacts of microplastics have received significantly less attention, researchers say.

The lack of emphasis on the latter may be related to obstacles involved in studying the smaller plastics.

“The main challenge is the interdisciplinary nature of every microplastics-related question,” said Irina Chubarenko, a researcher on microplastics at the P.P. Shirshov Institute of Oceanology in Moscow, who was not involved in the study.

“In order to investigate how microplastics influence marine life, you must learn which additives, plasticizers, and colorants are leaching from it,” she said. “In short, knowledge of the chemistry of plastics and the intricate details of the production process is required.”

Such a task calls for “new interdisciplinary approaches and ideas,” she said.

Despite the difficulties, however, a heightened focus on plastic pollution — of all varieties — is increasingly important, and not only for turtles and other marine life. A recent study published last month found microplastics in human feces for the first time.

“If we don’t stem the flow of plastic into the oceans, things are going to get a great deal worse and some of the potential factors of influence will start to become actual significant threats to marine life, tourism and possible food supply,” Godley said.

Perhaps the most worrying thing of all is that the current magnitude of the problem may be underestimated.

“The sheer scale of the plastic issue and levels of contamination of the environment is probably vastly higher than we already understand them to be,” Duncan said.