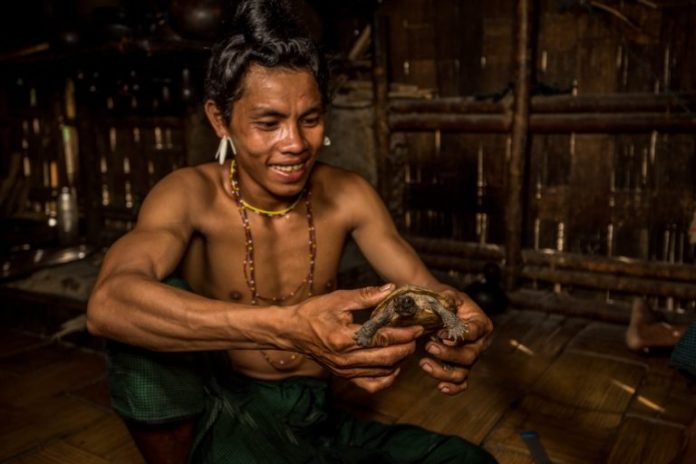 Today, the Mro parabiologists do much more than document the biodiversity of their ancestral forests for Western science.

To reduce hunting of turtles in the region, the CCA team has entered into a conservation agreement with six villages, establishing hunting moratoriums on highly threatened turtles and tortoises and other rare animals. In return, CCA helped the villages build six primary schools, where there were none nearby, and a Crafts for Conservation program that’s created a market for jewelry and other products crafted by the Mro women.

The Mro parabiologists monitor hunting and consumption of wild animals within these villages. If a parabiologist finds a turtle in a village home, he recovers the animal, takes its measurements, gives it an ID, and releases it back into the forest.

Menrua Mro, a 21-year-old parabiologist, who lives in Dangli Para village in Bandarban district, is one such turtle and tortoise guardian. Menrua had seen Rahman since the researcher started visiting his village in 2011, he told Mongabay. But, like most other parabiologists in his team, he started working with CCA only after his neighbor, Passing Mro introduced him to Rahman in 2016.

At the time, Menrua had been unhappy working on a farm, and was “looking for something else to do,” he said. So training as a parabiologist seemed like a better option. Menrua now goes from one village to another trying to dissuade people from eating or harming rare animals and birds like tortoises and hornbills.

“What I like best about this work is that I get to make new friends all the time from different villages and even in Dhaka and from other parts of Bangladesh,” Menrua said. “With the money I got through the work I was also able to pay back the debt my father had.”

So far, the Mro men have rescued and released more than 100 highly threatened turtles and tortoises into the wild — 21 of them in 2018 alone. In fact, Rahman’s team estimates that the hunting of these reptiles has declined by at least 50 percent in the area they’ve covered. They have also established the first in-country, captive breeding colonies of Arakan forest turtle and Asian giant tortoise to help secure the reptiles’ future.

In general, though, wildlife populations seem to have declined in the area, Rahman said, and the local people likely don’t find enough wild animals to hunt. Moreover, turtles and tortoises provide very little meat, so the Mro people have come to rely more on crabs and fish for their protein.

Apart from keeping an eye on turtles, some parabiologists act as protectors of nests of threatened great hornbills (Buceros bicornis). Some of the more senior parabiologists serve as community leaders, acting as a bridge between the research team and the rest of the Mro people. Others help with the plant nursery that’s been established to cultivate both bamboo to reduce the communities’ dependence on the forest for wood and rare native plants to help future reforestation efforts.

The researchers now work with 10 male parabiologists who each receive a monthly salary of about $100. They have upgraded to smartphones now to help with their monitoring work.

“They take pictures and send me photos and all other evidences by Messenger — who is cutting trees, which hornbill is nesting where, and so on,” Rahman said.

The Mro parabiologists have become so critical to the researchers’ work that they are regularly listed as formal co-authors of scientific papers.

“As scientists, we often have this ego that we know everything, but I can have five Ph.D.s and still never have the knowledge that these people have,” Rahman said. “These people read the forest like pages in a book. You show them a picture of a bird, and they would tell you about when it breeds, when its mating season is, which tree it nests in, where it nests, what its call sounds like.

“A lot of information that we collect and publish wouldn’t happen without them,” he added. “While this authorship may not matter to them at all, I think this is the respect they deserve.”

Sometimes, the Mro men end up surprised by the status of their own forests. For example, Proroy Mro, who co-authored a 2017 study looking at pangolin distribution in the CHT region, told Mongabay last year that whereas he used to think Bangladesh harbored lots of pangolins, the surveys showed him how few there actually are, and that he felt lucky to have so many near his village in the Chittagong Hill Tracts.

The Mro-CCA partnership has earned Rahman several laurels, including, most recently, the 2018 Whitley Award, dubbed the “green Oscars.”

M. Monirul H. Khan, a professor of zoology at Jahangirnagar University in Dhaka, said the Mro people had access to the deepest parts of the CHT, where the remaining forests and valuable wildlife occur, and they were the key to conserving whatever is left there. By gaining their confidence and partnering with them, CCA had “made a major breakthrough,” especially since no other organization had been able to develop such a mutual partnership, Khan added. “The Mro people live with the forests and wildlife of the CHT and their role is critical for any successful conservation initiative,” he said.

Rahman’s group has had less success partnering with the local branch of the Forest Department, though.

“They work separately, don’t communicate or share information with us, and don’t maintain good relations with us,” said S.M. Golam Mowla, a forest officer with the Chittagong division of the department. “They take permission from the Dhaka office, not from us, despite their site falling within the jurisdiction of Chittagong. If we worked together, we could jointly visit the area, we could help them with our local staff.”

Rahman acknowledged there was a lack of coordination between his conservation group and the local forest department. The Sangu-Matamuhuri Reserve Forest within the CHT region, where Rahman’s CCA team works, officially falls under the jurisdiction of the forest department. But the department has little actual authority over the area, Rahman said, primarily because of the complex political landscape, including local armed conflict.

“It is not their fault. It is because the area is remote, it is not safe, and they don’t have adequate resources,” Rahman said of the department. “If the forest department could find mechanisms to increase their presence there, the gap in communication will decrease and it would help us tremendously, and we could help them in return.”

Khan of Jahangirnagar University agreed that working in remote parts of the CHT was “extremely difficult, and there was very little or no presence of government officials in some areas.” 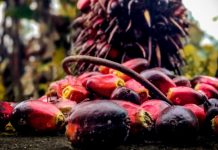 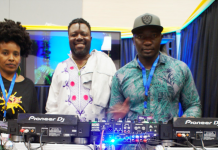