Rising human populations and widespread industrial agriculture have hemmed one of the least-understood cats on the planet into ever-smaller patches of forest on the island of Borneo, a recent study has found. But the research also suggests that protecting and rehabilitating a handful of strategically placed plots of forest could help to preserve a significant population of the Sunda clouded leopard (Neofelis diardi).

“Our study provides the first evidence that forest cover is crucial to maintain the connectivity of clouded leopard populations,” conservation ecologist Andrew Hearn of Oxford University said in a statement.

Hearn, the lead author of the study, added that private landholders own much of the forest that Sunda clouded leopards need to survive in the area around northwestern Borneo’s Kinabatangan River, and in many cases, it could disappear shortly. Authorities in the Malaysian state of Sabah, where the Kinabatangan is located, have designated nearly two-thirds of the region’s unprotected forests as sites for oil palm expansion.

Anchored by a 279-square-kilometer (108-square-mile) wildlife sanctuary, the area around the Lower Kinabatangan River is home to wild cattle called banteng, the world’s smallest variety of elephant, and the Sunda clouded leopard, a wild cat that weighs about as much as an adult collie. But closing in on this bevy of biodiversity are plantations of oil palm. Sabah is a palm oil powerhouse, producing 10 percent of the world’s supply of the ubiquitous vegetable oil.

Hearn and his colleagues knew that clouded leopards can cope with forest that’s been logged for timber or otherwise degraded. But they wanted to better understand the impact of outright deforestation — the kind necessary to set up an oil palm plantation. Investigations for the IUCN, which classify the Sunda clouded leopard as vulnerable, have pegged the population at 4,500 animals living mostly in Borneo but also on the Indonesian island of Sumatra.

For their research, the team fitted four clouded leopards in the Kinabatangan region with satellite collars and tracked their movements over the course of several months in 2013 and 2014. Based on that data, they built a statistical model to figure out why the cats chose specific paths and how future changes to the landscape might alter those choices.

“We found that forest canopy cover facilitates the movements of these cats through the landscape,” Hearn said, “but that recently cleared or underproductive and flooded oil palm plantation areas tended to resist their movements.”

That finding represents an opportunity, co-author Benoit Goossens said in the statement.

“Our research showed that the conversion of frequently flooded and underproductive plantations areas to forest would bring large benefits to Sunda clouded leopards,” said Goossens, a wildlife biologist at Cardiff University in the U.K. and director of the Danau Girang Field Centre, located in the Kinabatangan region.

At the same time, these areas often don’t produce the optimal amount of oil palm fruit, so turning them back into forest isn’t likely to have a negative impact on such a vital economic engine for the state, he added.

The authors write that the study demonstrates how the detailed understanding of an animal’s behavior can guide conservation planning, as well as the trade-offs possible in the protection of critical habitat.

David Macdonald, a zoologist at the University of Oxford and a co-author of the study, noted that the clouded leopard may be the “most difficult” wild cat to study.

“Our findings are a triumph at the intersection of naturalistic skills, high tech science and policy relevance,” Macdonald said in the statement. 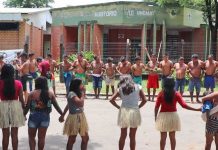 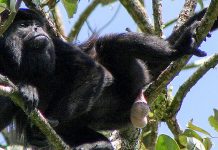 A national park takes shape in Argentina as the forest disappears