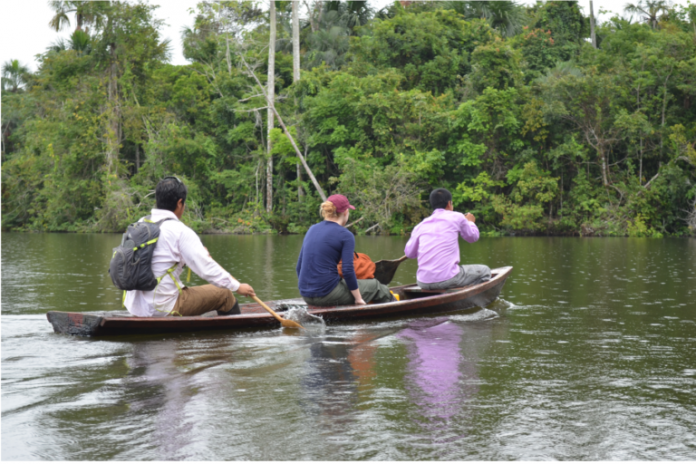 Peatlands, or bogs, are areas where a lack of oxygen in waterlogged soil allows dead vegetation to accumulate without completely decomposing. Scattered around the world in both northern latitudes and the tropics, some peatlands have been storing up for thousands of years, with peat that can be more than 20 meters (65 feet) deep.

“The importance of peatlands is now recognized given their capacity to store carbon in the soil, which worldwide is about twice the content of all forests on Earth,” Hinsby Cadillo-Quiroz, associate professor at Arizona State University, said in a statement.

But peat can also be sensitive to changes in temperature and precipitation. To figure out what effects climate change may have on Amazon peatlands, Cadillo-Quiroz and colleagues at other universities in the U.S. looked into how a peatland in the Amazon may respond to expected changes in temperature and humidity over the next century. Their results were published in Proceedings of the National Academy of Sciences.

For their study subject they chose the Pastaza-Marañon foreland basin (PMFB), located in northern Peru. Encompassing around 100,000 square kilometers, PMFB encompasses a vast tract of flooded rainforest and other types of swamps underlain by a thick foundation of ancient peat.

The researchers examined peat dating back 12,000 years to see how carbon accumulation responded to changes in temperature and precipitation. They then used that information to predict how the peatland will respond to future climate conditions.

Several previous studies indicate that northern Peru will likely be warmer and wetter in the future. The researchers found that in such a scenario, the PMFB peatland may lose more carbon than it sequesters, making it a carbon source instead of a sink. In total, they estimate that PMFB may release 500 million tons of carbon by the end of the century – roughly equivalent to 5 percent of the annual fossil-fuel emissions of the entire world.

“If the area we looked at could represent the whole Amazonia or tropical peatlands, the loss of peat carbon to the atmosphere under future climate scenarios should be of great concern to our society,” said Qianlai Zhuang, a professor at Purdue University and lead author of the study.

But the researchers say other human-caused stressors like agriculture may compromise Amazon peatlands before climate change gets a chance to. While the Pastaza-Marañon foreland basin has, so far, avoided the large-scale deforestation activities common in other parts of the Amazon, forests clearance appears to be on the rise in the region, according to satellite data compiled by the University of Maryland.

With trees gone, the peat they once shaded can more easily dry out and become highly combustible. Once ignited, peat fires release copious amounts of CO2 – and are notoriously hard to extinguish. Such was the case in Indonesia in 2015 when massive, uncontrollable peatland wildfires burned for four months, releasing more CO2 than Germany – the world’s sixth biggest emitter – does in an entire year. This wasn’t just harmful for the climate; researchers estimate the air pollution produced by the fires contributed to more than 100,000 premature deaths in Indonesia and beyond.

“Agricultural intensification and increasing land-use disturbances, such as forest fires, threaten the persistence of peat carbon stocks,” Zhuang said. “These peatland ecosystems may turn into carbon sources instead of sinks unless necessary actions are taken.”

Feedback: Use this form to send a message to the editor of this post. If you want to post a public comment, you can do that at the bottom of the page.

A mountain of a reef, taller than the Eiffel Tower, found on Great Barrier Reef

We can learn sustainability from traditional communities