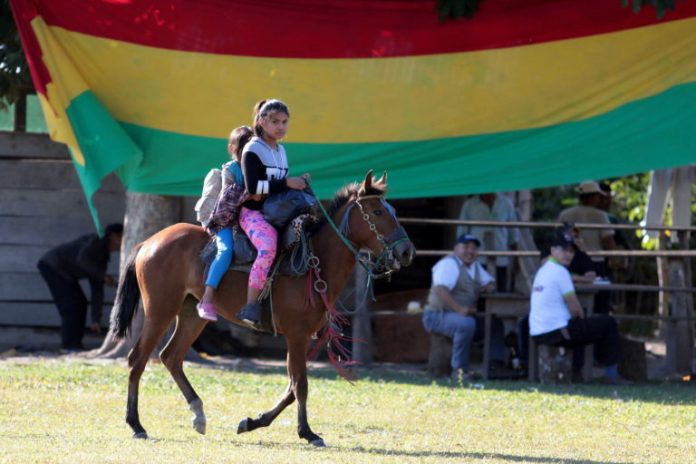 Life is hard for the community of Trinidadcito, but its people don’t feel poor. Rather, they say they’re being punished for opposing the construction of a highway that would cut through the heart of their territory.

The town’s approximately 150 residents live in the northern region of Isiboro Sécure National Park and Indigenous Territory, better known by its Spanish acronym, TIPNIS. The only concrete infrastructure in town is the health post, which was built in 2010. But there hasn’t been a resident doctor in the past six years, and today it’s defunct. The medicines stored inside an old cabinet have expired. Near the health center is the village school, where a teacher gives classes for children of all ages in two wood-frame buildings without walls.

The mayor of Trinidadcito, Darío Hou, is straightforward when he accuses the national government of the “abandonment” of his community. He says they were promised development projects, but none of them were carried out because of the community’s opposition to the construction of a highway through the TIPNIS. That opposition stems from a number of concerns, including the increased expansion of coca production and settlement of more coca growers inside the ostensibly protected area.

The mayor lists the communities that have not benefited from public works. “We are the 14 communities [in the TIPNIS] that are against the highway. We do not have support from the government despite what they promised,” Hou says.

Fabián Gil is president of Subcentral TIPNIS, the indigenous organization that holds the collective title to the land in the park outside the coca-cultivation zone in the south. He tells Mongabay it’s regrettable that the government has caused a rift within the indigenous communities in the park, which he says has led some communities to be “forgotten.” Gil doesn’t give an exact number of the “punished” communities but says they number more than a dozen out of the 64 settled within the TIPNIS.

“The community members live worse than before. There are no health posts, no new schools, and no [grid] electricity either, only generators,” he says. The promised social housing hasn’t been completed, he adds: “Something always gets in the way.”

Cecilia Moyoviri recounts her life in Galilea, another community without access to basic services. Like Trinidadcito, her village relies on a generator for its electricity. Clean water is very scarce and diseases proliferate among the children. “We are communities that are being punished. In Coquinal, the government built a huge school for few children. In these villages, there are more children but there are fewer teachers and schools,” she says.

Bolivia’s minister of government Carlos Romero, says there are no “punished” communities in the TIPNIS, much less communities “forgotten” by the government. He also says orders by President Evo Morales to improve the park residents’ standard of living are being carried out.

“That is not how the NGOs paint a picture of the situation in the TIPNIS. If we focused on access to health, education, housing and basic services in the TIPNIS, a lot of work was done. Of course, they are still lacking but sometimes the [community] leaders are badly advised and reject support. This government is the one that has worked the most for the rights of indigenous peoples,” Romero says.

Division is the common denominator in the TIPNIS. Gil identifies himself as president of Subcentral TIPNIS; however, the former president, Domingo Nogales, says he still holds the position. Both have conflicting views about the road project. Nogales is politically aligned with Morales’s Movement for Socialism (MAS), which is pushing for the road through the park.

“The advances are palpable and are within people’s sight. We cannot lie. If you visit the communities of the TIPNIS, you will see the missing development. That is why we ask the ministries and the Plurinational Legislative Assembly for more coordination for the good of our people,” Nogales says.

According to Ramona Moye, the MAS’s indigenous deputy for the TIPNIS, life in the nature reserve has improved since Morales became president. Before, she says, the territory was neglected by those in power.

Benigno Noza, an indigenous leader of the community of Nueva Galilea, holds an old booklet with photographs inside. One image shows Morales and a child in a public pool, while another shows a schoolhouse made of concrete. These facilities were supposedly built for the community. Not so, says Noza, who claims to have confronted the president about these projects that never materialized.

“He says he built a school in Nueva Galilea, see how nice it is,” Noza says. “I’d like my children to study there, but it’s a figment. They also claim to have built 24 houses, but it’s a lie. There isn’t even one. They’re all just phantom projects.”

Moye says she’s committed to addressing the complaints, but insists that Morales has inaugurated projects in Nueva Galilea and that he will respond to Noza’s claims.

This story was first published in Spanish on our Latam site on Aug. 26, 2018.

This article was created in a collaboration by Mongabay’s Latin America (Latam) team and Bolivian newspaper El Deber.