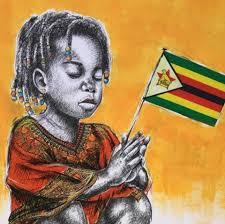 Was it not Prof. PLO Lumumba who argued that, time limits are good things. No matter how good a dancer you are, you must leave the stage?

Looking back, the realization is overwhelming just how potent that statement was within the Zimbabwean democratic rhetoric.

The jubilation that filled the streets of Zimbabwe in 1980 when the country gained its independence was euphoric and well justified, after all it highlighted the end of the war and suffering of the marginalized black majority.

The people were filled with hope and excitement of the prospects of a better Zimbabwe for all, what a time to be alive, to witness history in the making.

Amandla! Ngawethu, the slogan chant echoed through the dusty suburbs and growth points that harboured the vast majority of Zimbabwean, as the promised land was finally in their hands, or was it?

Fast forward, 40 years on and the slogan chant has evolved to #ZimbabweanLivesMatter, did the Zimbabwean people win one war on repression only to find themselves smack bang in the middle of another? The rhetoric is out, You figure it out.

The currency of todays democracy in Zimbabwe is steeped in words like, bigotry, breach of peace, intentions to incite public violence and new terrorist threats according to the current president, Emmerson Mnangagwa who alleges that the opposition party MDC, under the leadership of Nelson Chamisa, is to blame for all these irregularities.

The brutality of current junta government knows no end, gender or relations as prominent journalist Mduduzi Mathuthu was to discover. His involvement in exposing the rampant and explicit corruption within the government, provoked immediate reprisal in the most eloquent way possible;

“WE SEE YOU, AND AS SUCH WE APPRECIATE YOUR EFFORTS”

This reprisal came three days later, after having fled his homestead in fear of his life, in the form of his 22-year- old nephew, allegedly found, badly injured, with extensive bruising, tissue and acute kidney injuries.

There has been an ongoing debate that the Zimbabwean crisis needs Zimbabwean people and that it can only be won by the united efforts of Zimbabweans, both locally and the estimated 4 million in the diaspora.

Unfortunately, as evidenced in his recent televised address, President Emmerson Mnangagwa made it clear that those in diaspora were working in league with foreign detractors, and as such the military would respond brutally and crush any emerging dissent with extreme prejudice.

His sentiments echoed, a rising fear and acknowledgement, that like the November 2017 ousting of Mugabe, the general atmosphere in the country was at boiling point, balanced precariously between the rising anger of the general Zimbabwean population baying for new leadership and President, Emmerson Mnangagwa’s continued brutal military efforts to quell the dissent.

One thing is clear, democracy is dead in Zimbabwe and as the #ZimbabweanLivesMatter, gains momentum globally, it is just a matter of time before the smoke clears and the world learns on which side the coin of democracy lands.