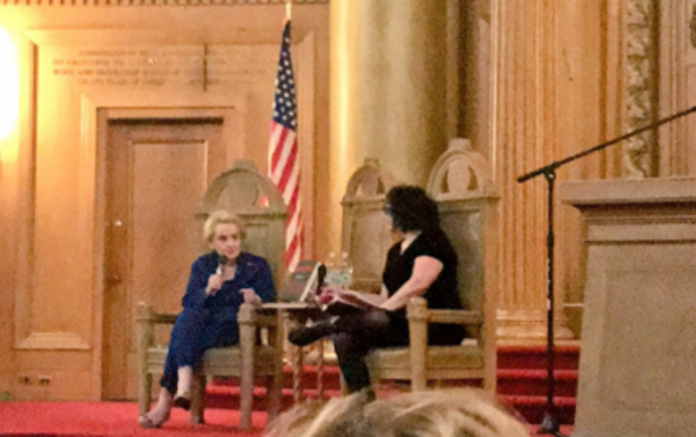 Albright is often described as a war hawk for helping to facilitate the NATO bombing of Yugoslavia in 1999, which was illegal and devastated the country. She also expressed support for United Nations Security Council sanctions against Iraq over allegations of weapons of mass destruction, which a humanitarian arm of the United Nations later said caused the deaths of 576,000 Iraqi children.

Lately, the former top diplomat has become known as an outspoken critic of US President Donald Trump. Since Trump announced his candidacy in June 2016, Albright has gained more than 126,000 followers on Twitter. Now, the first female secretary of state is touring the country for her new book “Fascism: A Warning.”

​Members of the International Action Center in New York City sat in attendance at Albright’s talk, tweeting that they were “going to surprise” her. A woman’s voice can be heard in video tweeted by the group, yelling “You killed half a million Iraqi children. You have blood on your hands!”

Albright responded to her critic by insisting, “I do actually believe in free speech.”

Sputnik spoke with Taryn Fivek, a member of the International Action Center who protested Albright’s speech Tuesday. She says that the group was not just protesting Albright’s policies towards Yugoslavia and Iraq, but Palestine also.

​”Everything that happened in Palestine during the beginning of the Second Intifada and during the so-called peace process with Bill Clinton actually happened under Madeleine Albright’s watch, so I consider any violence done against Palestinians during her tenure as something that she is partially responsible for, because the United States gave so much money to Israel every year for military assistance,” Fivek told Sputnik. “Also, Israel can’t really sneeze without the US saying that it’s OK.”

Later in the night, another woman interrupted Albright, shouting, “Madeleine Albright is a war criminal. A war criminal!” before being booed down by the crowd.

“I respect your right to talk, I would like you to respect mine,” Albright fired back, drawing cheers.

“She’s crazy,” one audience member can be heard saying about the demonstrator.

Albright addressed the 1996 “60 Minutes” interview she did in which she called the deaths of the half-million Iraqi children “worth it.”

“Let me just say the following thing: I did say something that I regret a great deal. I have apologized for it a hundred or many more hundreds of times,” Albright told the crowd.

“It obviously made the US look terrible at that juncture and made her look like the ghoul warmonger she is,” Fivek added.

Another protester, Fivek, then stood up to unfurl a banner, but had it quickly ripped from her hands. She told Albright she “didn’t mention the sanctions” and “you’re a murderer and you should be in jail.”

“I made a stupid statement,” Albright said before modifying her account of the children’s deaths. “The person who killed the children in Iraq was Saddam Hussein,” she said, as protesters can be seen getting escorted out by security.

Albright’s speech in Brooklyn was disrupted twice more by protesters. “The United States put sanctions on [Iraq], and it never affected food and medicine,” Albright insisted as one protester was being removed, telling him “I have apologized for that statement and you don’t listen.”

“We all got a free copy of the book [Fascism: A Warning] as part of buying a ticket into the event,” Fivek told Sputnik. “So I was waiting for Madeleine Albright to come out — I was actually looking through the book at the time and honestly it’s just a case for war. It’s a case for US imperialism. It’s calling any and all movements abroad that are popular movements, regardless of their political character — so long as they’re angry, she’s calling that fascist… At one point she even compares Hugo Chavez to Benito Mussolini, for instance.”

This is not the first time Albright has been protested at a speech. Last year, students at an all-women college graduation ceremony threatened to boycott the graduation if she was the speaker. Twenty-eight professors also protested, signing an open letter to the University, saying during Albright’s service as US ambassador to the United Nations and US secretary of state, “she supported several policies that led to the deaths of millions of people.” As the US UN ambassador, Albright worked under Zbigniew Brzezinski, an outspoken supporter of the Afghan Mujahideen, whom he said the US had been supporting prior to the Soviet invasion, in order to give the USSR “their own Vietnam.”

“She clearly not talking about fascism, she’s just making a case for more US war and more US intervention across the globe, but from this sort of liberal, hand-wringing perspective that goes along with the Democratic party leadership,” Fivek told Sputnik.