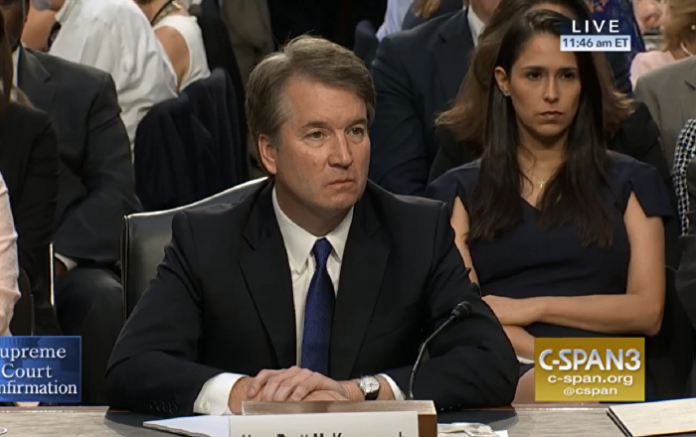 Bash was sitting behind Trump Supreme Court nominee Brett Kavanaugh during his confirmation hearing on Tuesday. Twitter users were quick to pick up that she, at one point, made the “OK” symbol with her hand, a sign that has recently been appropriated by white nationalists.

The only problem is that all indicators seem to point to it being entirely unintentional. Bash’s mother is of Mexican descent, and her father’s side is Jewish. In fact, Bash’s grandparents were Holocaust survivors.

After a Twitter account claiming to belong to a rogue staffer of the United States Mint shared a video of Bash flashing the “white power sign” during the hearings, it blew up. Resistance Twitter firebrand Amy Siskind wondered, “What fresh hell is this!!!???”

“Kavanaugh’s assistant Zina Bash giving the white power sign right behind him during the hearing? This alone should be disqualify!!!” she said in a now-deleted tweet.

Other verified, or “blue check” Twitter users have chimed in to call Bash a “neo-Nazi,” “racist” and “white supremacist.”

After the term “Zina Bash” racked up more than 70,000 tweets, Twitter decided to label the topic a “conspiracy theory” it in its trending section.

That’s because friends of Bash’s came swiftly to her defense — as did her husband, who tweeted that neither of them have anything to do with hate groups. US Attorney for the Western District of Texas John Bash tweeted, “The attacks today on my wife are repulsive. Everyone tweeting this vicious conspiracy theory should be ashamed of themselves. We weren’t even familiar with the hateful symbol being attributed to her for the random way she rested her hand during a long hearing,” he said.

Journalist Katie Herzog called on Twitter users to “attack her for her politics, not her posture,” calling the analysis of the brief video “some Qanon level bullshit.”

Sputnik News reported that on August 28, a Department of Homeland Security analyst working on immigration, who was appointed by President Trump, resigned after emails linking him to prominent leaders of the so-called alt-right movement were leaked.