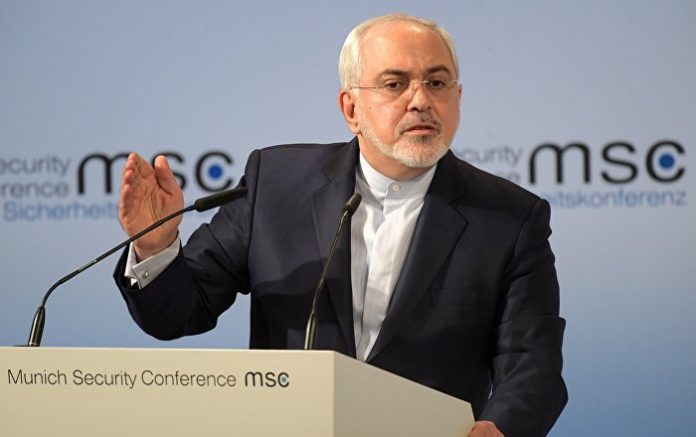 Zarif went on the offensive against Washington, listing in a tweet 11 actions undertaken by the US that are “not ‘normal.'” While the message follows the US State Department’s labeling of Iran as the leading global sponsor of terror, the use of the term “normal” alludes to the mid-August creation of the Iran Action Group, also by the State Department. In the statement announcing its foundation, US Secretary of State Mike Pompeo said that the “Iranian people and the world are demanding that Iran finally act like a normal nation.”

“It is not ‘normal’ to impose harsh sanctions that harm ordinary innocent people in the name of ‘standing with’ them,” Zarif seemingly fired back on Friday.

At the August 16 briefing on the new group, Pompeo announced that Brian Hook, whose most notable roles as a public servant were in the George W. Bush administration, would lead the Iran Action Group and serve as the US special representative for Iran.

When Associated Press diplomatic reporter Matt Lee told Hook that “it has not gone unnoticed that this announcement is coming right at the 65th anniversary of the 1953 coup in Iran and has prompted lots of speculation about this being the formal group that is going to oversee some kind of — or try to oversee some kind of — regime change” in Iran, Hook assured him the timing was “pure coincidence.”

Zarif on Friday also hammered the US for breaking international commitments and violating UN Security Council (UNSC) resolutions they themselves sponsored in relation to their withdrawal from the Joint Comprehensive Plan of Action (JCPOA), or Iran Nuclear Deal. He also called out the invasion of Iraq under false pretenses, drone strikes against civilians, the Guantanamo Bay prison camp, military assistance to the Saudi-led coalition engaged in “war crimes” in Yemen, punishment of Palestinians facing an “apartheid regime,” its row with the International Criminal Court and abuse of its temporary presidency of the UNSC.

Zarif’s final point on the list: “It’s not ‘normal’ for anyone to have to make a list like this, one that could go on for much longer…”

As the State Department refines its anti-Iran toolbox, journalist Karla Ann Cote spotted protesters outside the United Nations Friday — a day during which the UNSC is meeting — calling for a “free Iran [in] 2018.”

On Thursday, US Ambassador to the UN Nikki Haley told the UNSC that Iran is “reportedly” funneling and developing missiles to and inside of Iraq, although she didn’t specify from where she had seen such reports.

“Iranian proxies in Iraq operate openly, with funding, training and weapons supplied by Tehran. The Iranian regime has reportedly begun over the last few months to transfer ballistic missiles to these proxies in Iraq. It is reportedly developing the capability for its proxy militias to produce their own missiles inside of Iraq,” Haley said.

Sputnik News spoke with Middle East expert and American studies professor at the University of Tehran Mohammad Marandi, who indicated that the United States is angry that its political project in Iraq is not going as planned. “We see that despite immense US pressure, the US candidate, who is the current prime minister of Iraq, doesn’t seem to have any chance to remain as prime minister and that the groups that are closer to Iran are forming the government despite US threats, US pressure and contacts from senior officials — Secretary Pompeo made phone calls, the special envoy in Iraq [made calls] — they were cooperating with the Saudis and Emiratis to form a government that was close to the United States and hostile to Iran. But they failed,” Marandi said.

Haley’s statements came one day after the State Department’s accusations against Iran, naming six countries in the Middle East where Iran is attempting to foment violence: Iraq, Syria, Lebanon, Bahrain, Afghanistan and Yemen.

Marandi roundly rejected the allegations, breaking down Iranian involvement in each of the six countries. When asked which country is the true global leader in sponsorship of terrorism, Marandi pointed to the United States.