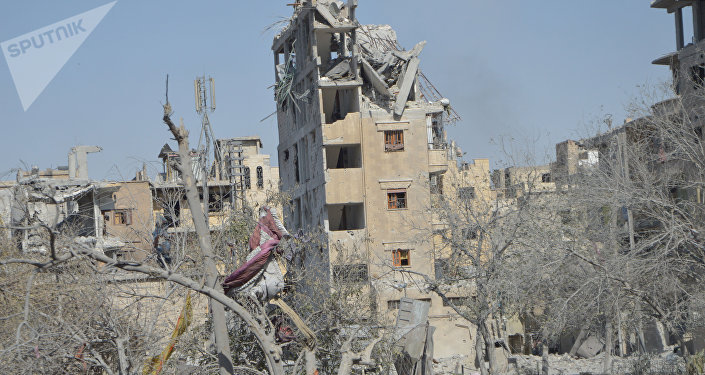 A new report by London-based non-governmental watchdog group Airwars has mapped all but four of the 344 publicly confirmed airstrikes by the US-led coalition against Daesh* that resulted in civilian deaths in Iraq and Syria.

The air war, which was coordinated by Combined Joint Task Force-Operation Inherent Resolve (CJTF-OIR), ostensibly included more than a dozen nations but in practice was mostly a US operation. It began in October 2014 as Daesh’s empire rapidly spread across northern Iraq and central and eastern Syria. The group grew out of the chaos of the Syrian Civil War but fed on a variety of material and financial support reportedly provided to Syrian groups from the US and Saudi Arabia.

New: Following several years of patient engagement with the US-led Coalition @CJTFOIR in Iraq and Syria, Airwars has obtained the close locations of 99% of all officially confirmed or ‘Credible’ civilian harm events. It’s a major transparency breakthrough. https://t.co/p2KDeb5M4R

​According to the Washington Post, the airstrikes were geolocated using information provided by the coalition, enabling Airwars to give the precise location for many strikes it had learned of through on-the-ground work.

“The Pentagon’s disclosure marks the first time any military has provided this kind of detailed information about a major operation, offering a potential blueprint for greater transparency in the future,” the Post noted.

“These located events represent the most accurate and comprehensive data ever publicly revealed by the US military about the harm it causes in war,” Airwars wrote. “In a significant number of these events, precise cross matching reveals exactly which civilians died, when and where. Given sometimes limited on-the-ground reporting by local communities during the heat of battle, other cases have only been revealed due to US pilots and analysts coming forward and flagging concerns.”

Col. Myles Caggins, the former chief spokesperson for CJTF-OIR, told Airwars: “We take every allegation of civilian casualties with the utmost sincerity, concern, and diligence; we see the addition of the geolocations as a testament to transparency, and our commitment to working with agencies like Airwars to correctly identify civilian harm incidents.”

However, Airwars notes that for all the Pentagon’s transparency, a significant discrepancy exists between the group’s civilian death count of 2,024 fatalities and the “conceded civilian deaths according to CJTF-OIR,” which has admitted to causing 1,410 such deaths.

The Washington Post, Airwars
Graphs showing the cumulative increase in number of civilian deaths and number of coalition airstrikes or artillery strikes between January 2015 and March 2019.

One reason for the discrepancy is hinted at by the Post: “Throughout the campaign, strikes took place in crowded urban environments, where it was more difficult to distinguish between civilian and [Daesh] targets,” the paper wrote.

In other words, indiscriminate bombing of urban areas made it impossible to tell how many civilians had been killed by a bomb strike.

This isn’t the first time Airwars has busted the coalition on its confirmed death tolls: a previous report by the group in conjunction with Amnesty International in 2017 found the death toll from US airstrikes and artillery shelling in Daesh’s de facto capital of Raqqa was 10 times what the coalition claimed, amounting to at least 1,600 civilians.

Earlier this month, the coalition revealed that since 2014, it has carried out nearly 35,000 airstrikes against Daesh targets across Iraq and Syria. The majority of those operations occurred under former US President Barack Obama, although according to Airwars’ new report, civilian deaths from airstrikes didn’t reach their peak until the middle of 2017, after US President Donald Trump took office.

However, despite Trump’s declarations that Daesh has been defeated, the US is continuing operations against the group. In September, the aircraft carrier USS Nimitz launched sorties to hit several Daesh targets in Iraq.

*Daesh (IS/ISIL/ISIS) – a terrorist organisation banned in Russia and many other countries.