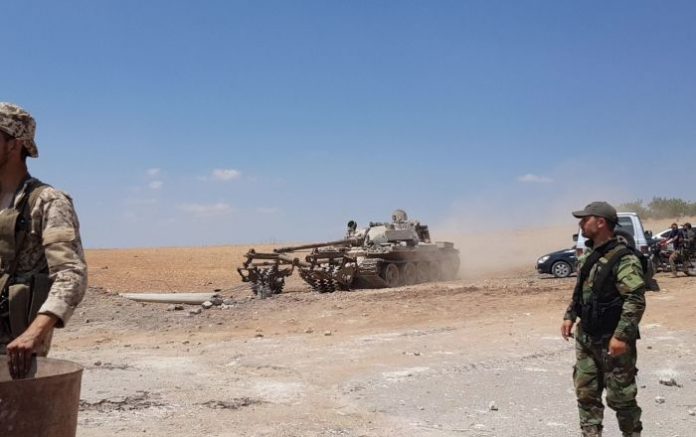 “Our fighters discovered this cave after the liberation of the south of Idlib province, which took place in late August. Apart from being a powerful fortified area, it also stored scores of various weapons and combat outfit of militants: here are a helmet, uniform and gas mask; and here is a heavy machine gun belt and rocket-propelled grenade munitions,” Meikhun said.

According to him, the cave is about 10,000 square meters (107,639 square feet) and has an extensive system of tunnels. The facility also had a command post with a map of the city of Khan Sheihoun and the village of Morek, a field hospital and sleeping rooms.

Meikhun noted that each of the tunnels was at least 200 meters long. Before leaving, militants hastily mined the facility, with sapper work still underway.

In addition, this cave could have been used by the White Helmets, an NGO suspected of being linked to jihadist rebel groups, for shooting videos of staged chemical attacks to frame the Syrian government forces.

In August, the Syrian government conducted a military operation during which it seized parts of Hama and Idlib provinces that had been controlled by militants since 2014, including the strategic city of Khan Sheikhoun and access to the M5 highway linking Damascus and Aleppo.

On April 4, 2017, the Syrian opposition claimed that over 80 people had been killed in a chemical attack in Khan Sheikhoun, blaming the Syrian government for it. Even though Damascus strongly denied the accusations and no convincing evidence to the contrary were provided, the United States struck Shayrat airbase controlled by the Syrian government three days later.

During his visit to Damascus in August, Russian lawmaker Dmitry Sablin stressed the importance of Khan Sheikhoun’s liberation, noting that it opened an opportunity to investigate the chemical weapons provocation that was used as an excuse for the US attack.