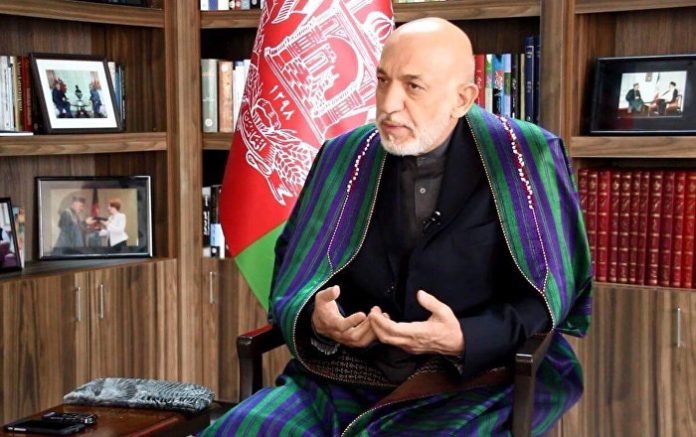 Former Afghan President Hamid Karzai said Sunday that Russia was the only force that could help Afghanistan fight terrorism.

“I understand perfectly well that if you [Russia] build new relations with Pakistan and Afghanistan, you can help us. Not the Britons as we kicked them out of the country several times, not the Americans as they’ve been killing us for 17 years, but Russia only. We [Afghanistan] are the last barrier from terrorists. We’ve been fighting continuously for a century and a half,” Karzai toldthe Russian NTV TV channel.

“Moscow has always helped us, even when its forces invaded Afghanistan at the invitation of then-president Babrak Karmal. We surely fought each other at those times, but you [Russia] used to build schools and hospitals in Afghanistan. Americans lie when they say that al-Qaeda emerged as the result of your invasion. They used the war to grow al-Qaeda in Pakistani military camps. They wanted to be the only superpower and they did it. The USSR collapsed and one of the reasons was the Afghan war,” Karzai said.

The former president noted that, when the US had declared war against the Taliban, he had told Russian President Vladimir Putin that “something wrong began to emerge.”

“The Americans deceived everyone again at that time. What kind of war with terrorism is it? The Taliban has more and more weapons…and we can’t handle them without Russia’s help, because we understand that the Taliban is being fuelled from Pakistan as the group partly consists of foreigners,” Karzai noted.

According to the official, the US firstly allegedly pumped billions into Pakistan and then declared there were no special relations with the country as the Asian nation failed the US.

READ MORE: US Wants to Be ‘Sole Leader in Our Country’ — Afghani Lawmaker

For all requests to explain its actions, the US answered with neutral phrases, like “in order to defend stability in the region,” Karzai explained, adding that he had decided to resign after he had come up with the idea that Afghanistan was just being used.

“People used to come to me continuously from four different provinces, saying that foreigners had come by unidentified choppers to kick them out of their building and kill them….The foreigners are much more dangerous, they called themselves ‘the caliphate.’ There are several thousands of them now in Afghanistan,” the ex-president said.

At the same time, Karzai noted that Afghanistan’s airspace was “fully controlled by the Americans.”

“Nothing flies without their permission. They have mercenaries in Afghanistan with their own army, aviation and security service. I tried to kick them out of the country, but I failed,” Karzai concluded.

Afghanistan has long suffered from political, social and security-related instability because of simmering insurgencies, including by the Taliban and Daesh. The US and the Kabul government have been fighting a war with the Taliban since 2001. Before that, the country faced nearly two decades of civil war, remaining divided into several warlord-controlled regions throughout much of the 1990s.