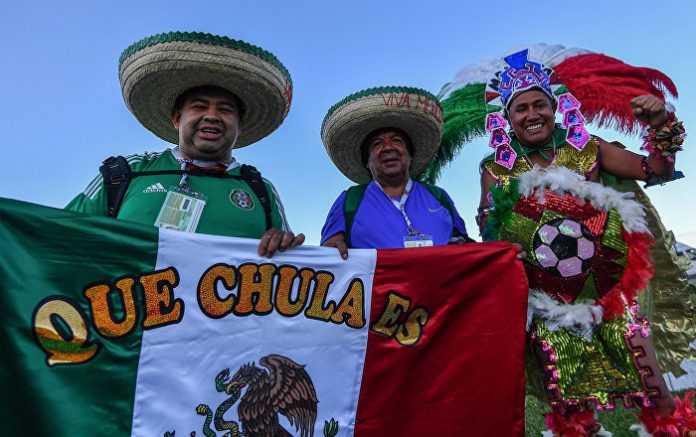 “I told my wife, I’d go to Oxxo [a popular convenience store chain in Mexico] for some cigarettes, but I did not tell her which one,” Arturo Garcia, a Mexico soccer team fan from Puebla, told a news reporter in Russia. So, technically his words wouldn’t be a lie, of course, if he buys cigarettes before returning home.

The man’s unusual adventure wasn’t spontaneous: he began his journey a week ahead of the Confederations Cup. Before going out “for cigarettes,” Garcia took his stash of cash and drove to Mexico City, where he departed for Germany.

The passionate football lover stayed for some time in Wolfsburg with his relatives, where he damaged his leg while playing volleyball. But nothing could stop him, not even the dramatic injury. With two crutches, the Mexican flag on his shoulders and a bag in his hand, he headed to Berlin. However, destiny put his ambitions to the test again: the Wolfsburg- Berlin train was two hours late due to a terrible downpour that paralyzed the most of the city’s public transport. However, Garcia managed to be in time to board the plane to Russia.

Garcia spent the entire group stage of the Confed Cup in Kazan — and, apparently, he liked the Russian city very much. “It is an excellent city and not very expensive,” the man admitted. Garcia didn’t miss a single game of his favorite football team and said he was determined to stay in Russia as long as the Mexico squad remains in the tournament. For the time being, Mexico is to play against Portugal in a third-place match on July 2.

Arturo’s wife has already found out about his crazy trip to the other end of the world; however, it remains unknown if she is mad at him or not. Hopefully, the story will get a happy ending.