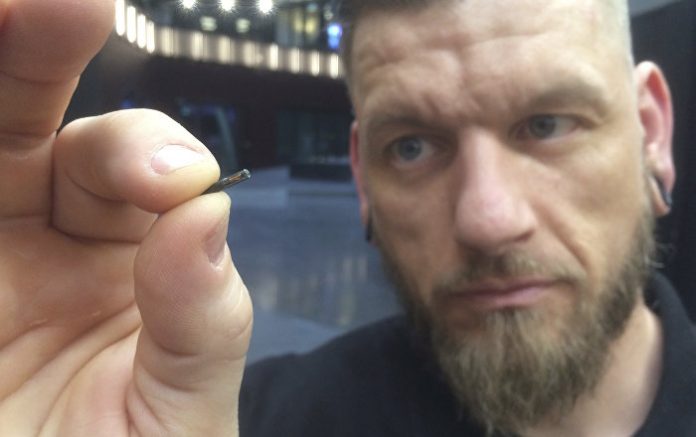 Using today’s cutting-edge technology, a microchip, which takes half a second to install, can be read from several decimeters’ distance, and its contents can be altered using a mobile phone. From that moment onwards, the digital microchip may be used for many features commonly performed in Scandinavia using mobile phones, such as opening and unlocking doors, paying for goods and services, and storing data.

“Getting into the high-end clients, CEOs and CTOs was essential to bring about a quick change in a difficult-to-maneuver bureaucracy. If you can get them on the hook, you get a completely different impact,” Jowan Österlund told the Swedish economic magazine Veckans Affärer.

Magnus Glantz, a software developer at Red Hat, became the first Swede to have a microchip implanted, only to be followed by Fredrik Östbye, a business development manager at Telenor Connexion. According to Jowan Österlund, who has installed over 1,500 microchips, digitalization saves a huge amount of time and leads to more efficient logistics. This new wave is gradually rising in popularity, although it still raises eyebrows.

​”The most common response I get is ‘Whoa, you must be kidding!’ And then people often say: ‘Oh, how exciting, can I feel it?’ People get mighty curious about this thing,” Tobias Degsell, who has a chip installed between his thumb and index finger, told Swedish Radio.

Tobias Degsell is not concerned that unauthorized persons may get access to his personal data and considers microchips to be perfectly safe.

“I imagine I’d become suspicious if someone came across my computer here, so I can change the password immediately. I believe this is the most secure system I’ve seen so far,” Degsell said.

While the microchip is a perfectly safe and handy means of data storage, it nevertheless evokes uncanny thoughts of a dystopian Big Brother society or even the “mark of the beast” referenced in the biblical account of humanity’s end-times, even if today’s generation of microchips, which are also used to tag pets, contains no transmitters.

According to Uppsala-based IT strategist Markus Bylund, people already live in a surveillance society and leave a lot of electronic tracks that can be easily traced.

“We focus on minor things such as implanting microchips at the same time that personal information is being gathered en masse online or via mobile phone conversations and text messages. Some of this information may actually pose a threat to democratic society,” Markus Bylund said.