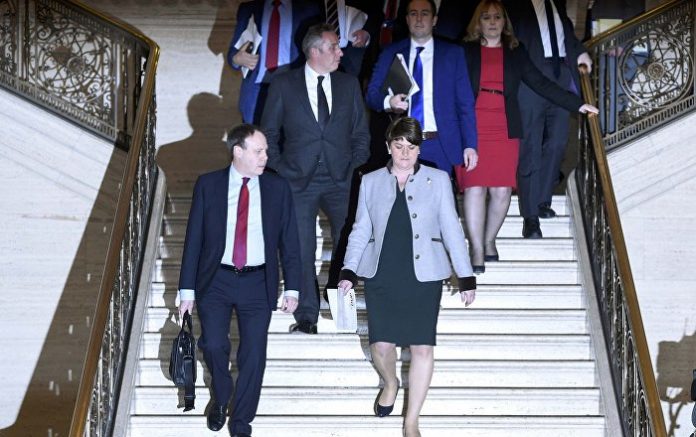 Negotiations broke down before Easter after the Democratic Unionist Party (DUP) and Sinn Fein failed to agree to form a coalition in the Northern Ireland Executive, marking three months of political stasis, following the resignation, January 2017, of deputy First Minister Martin McGuinness which caused the collapse in the administration.

However, the political standoff has now been further exacerbated after UK Prime Minister, Theresa May, called a snap election, June 8, which has thrown the whole situation in Northern Ireland into turmoil.

This is my Plan for Britain. A plan to get the right deal for Britain abroad and a better deal for ordinary working people at home. pic.twitter.com/1l9ddAfkmw

Following the elections, May 2016, the DUP and Sinn Fein won the most seats and the DUP nominated Arlene Foster as First Minister, with Sinn Fein nominating former IRA paramilitary commander Martin McGuinness as deputy First Minister.

However, McGuinness resigned, January 9, over a row between the two parties over a botched green energy scheme originally overseen by Foster, which was supposed to incentivize people to switch to renewables, but which collapsed because of flaws in the scheme which allowed for wide scale abuse of the system, leaving taxpayers with a bill of up to US$486 million.

The collapse led to a second election, March 2, the DUP lost its long term majority and all parties are now deadlocked, with neither the DUP, Sinn Fein and all the minority parties able to reach agreement. That could lead to another election, but the British Government is reluctant to order one or impose direct rule from London.

The political landscape has now shifted further with the announcement of a general election, in which the people of Northern Ireland will vote for representation in Westminster. The first-past-the-post system means that the minority parties tend to get squeezed out, because unionists and nationalists tend to block together in each of the 18 constituencies.

That means that the minority parties — who are key to finding a way through the Northern Ireland Executive crisis — will have little chance of being elected, which is likely to blur the negotiations further.

The situation is muddied even further because Northern Ireland voted to remain in the EU, while the UK as a whole voted out. That has thrown up the thorny issue of the border between Northern Ireland and Ireland, which would become an EU external border post-Brexit.

Theresa May has now called a UK-wide general election — mainly to gain a mandate for her Brexit negotiations — at a time of political upheaval in Northern Ireland and will likely resurrect decades of mistrust and hatred between the various factions of unionists and nationalists.