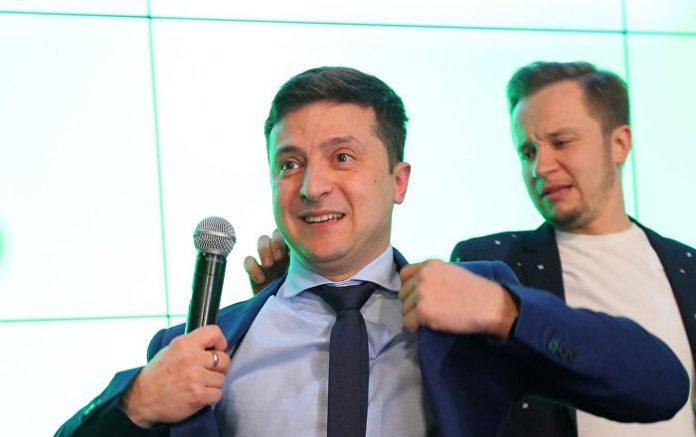 Ukrainian comedian Volodymyr Zelenskiy has secured 73.17 percent of the vote, the Central Election Commission said Monday, after 95.06 percent of the ballots were counted.

Le Monde says Ukraine is making “a jump into the unknown” with Zelenskiy who “embodies a profound change.” Le Figaro calls Zelenskiy’s landslide triumph over incumbent President Petro Poroshenko a “crazy victory” and suggests that his media-friendly campaign could change the rules for future campaigns not only in Ukraine, but possibly in all of Europe.

On the other side of the English Channel, The Telegraph argues that “a lack of reform” in the last five years has led people to back Zelenskiy. However, the newspaper points out that little is known about Zelenskiy’s plans.

The Guardian similarly notes lack of details about the candidate’s future policies in his victory speech on Sunday. The UK newspaper reports that people seemed to be choosing “the least-worst option” rather than enthusiastically endorsing either candidate.

According to The Washington Post, Ukrainian voters “rebuked the ruling elites” by choosing Zelenskiy and his “anti-establishment, antiwar and reformist message.”

The New York Times suggests that voters have signaled that they are tired of the establishment and concerned with domestic issues, such as corruption. According to the newspaper, many voters said their choice was more of a protest vote against Poroshenko than a show of sincere support for his opponent.

Germany’s Der Spiegel similarly suggests that Poroshenko was “punished,” with Ukrainians demonstrating that they are “tired of politicians who see only their personal interests.” At the same time, Der Spiegel points out that Zelenskiy’s political agenda is largely unknown, except for some general ideas.

Frankfurter Allgemeine Zeitung remarks that Zelenskiy has been criticized over paying too little attention to the political details. He presented his team just three days before the election and gave few details about future appointments on the election night, the newspaper adds.

The Politico outlet points out that Zelenskiy’s comments so far make it difficult to predict anything about his next steps. At the same time, the outlet suggests that Zelenskiy’s landslide victory will lead to high expectations among millions of Ukrainians who backed him.