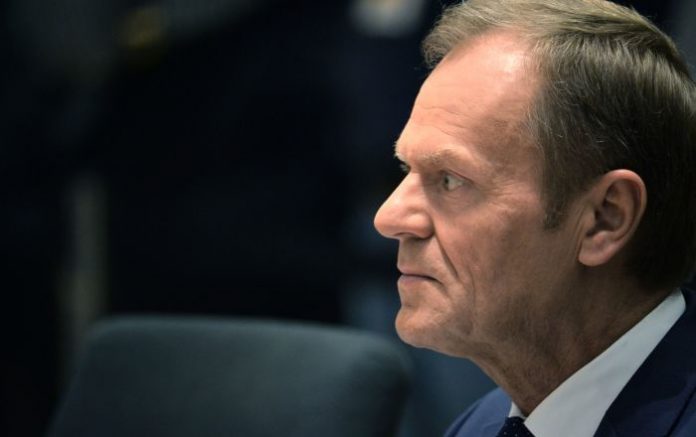 Speaking at the College of Europe’s opening ceremony for the 2019/2020 academic year, Donald Tusk has called campaigners not to “give up” on reversing Brexit, warning that the UK would become a “second-rate player” after it leaves the EU. To illustrate his point, Tusk offered the audience a colourful comparison, likening Brexit to a game of football.

“So the only words that come to my mind today are simply: Don’t give up. In this match, we had added time, we are already in extra time, perhaps it will even go to penalties?”

Less than a month before quitting his post, the EU Council chief also said the UK would become an “outsider” should Brexit be fulfiled, and that a friend of his who predicted it as “the real end of the British Empire” might ultimately turn out to be right.

Donald Tusk has shared that Brexiteers who believe departing from the European Union will make the UK a global entity again and that “only alone it can truly be great” are wrong.

“The reality is exactly the opposite”, he noted arguing that solely “as part of a united Europe” the UK “can play a global role”, summing up:

“Only together can we confront, without any complexes, the greatest powers of this world”.

He addressed the world’s geopolitical divisions citing a number of countries that stand by European unity:

“In fact, I can say the same about Germany or France. And the world knows it. I have heard the same in India, New Zealand, Australia, Canada and South Africa; that after its departure, the UK will become an outsider, a second-rate player, while the main battlefield will be occupied by China, the United States, and the European Union”.

He recounted being asked one and the same “regretful” question “everywhere he went”:

In a reference to former Commons Speaker John Bercow, who portrayed Brexit as “the biggest foreign policy mistake in the post-war period” as soon as he announced his decision to quit, Tusk said:

“I want to tell you something I wouldn’t have dared to say a few months ago, as I could be fired for being too frank”, he started off, continuing:

“And today it is simply too late to impeach Donald, at least the European one. In fact, I envy John Bercow, that he can finally, honestly say what he thinks about Brexit”.

The former Polish prime minister will step down as EU Council President on 1 December and be replaced by former Belgian Prime Minister Charles Michel.

The comments come against the backdrop of ongoing political campaigns ahead of the snap election slated for 12 December. Earlier this month, British MPs voted 438 to 20 to support Johnson’s proposal to hold an early general election to attempt secure a majority in Parliament and have his Brexit deal with the EU finally ratified.

In terms of Brexit deadlines, the EU granted the UK another delay until 31 January in order to have a sufficient amount of time to sort out their domestic deadlock.

Belarus Election: What Happened at Mass Protests in Minsk Overnight