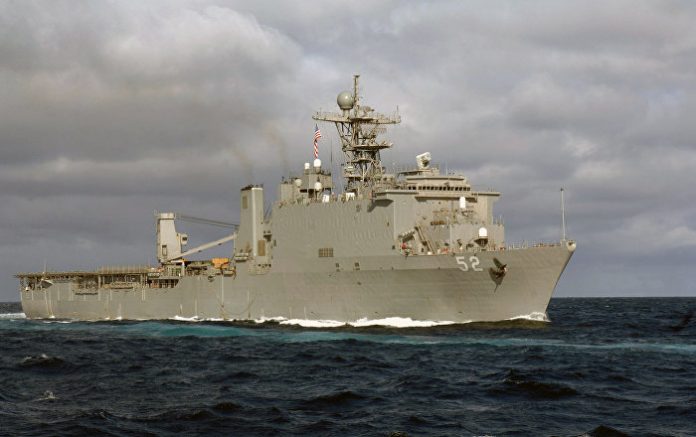 New Delhi (Sputnik) – US Navy’s amphibious dock landing ship USS Pearl Harbor with around 2200 sailors and marine commandos on board arrived at the western coast of southern Indian state of Goa Thursday morning. This is the ship’s first visit to India. Though the visit is part of an ongoing international trip of the US Navy’s 15th Marine Expeditionary Unit (MEU), it assumes special significance for India with the ongoing standoff with China at the backdrop.

“USS Pearl Harbor is a Whidbey Island class (cargo variant) amphibious dock landing ship with a crew of over 700 sailors and embarked marines. While in Goa, the ship’s sailors and marines will conduct exchanges with the Indian Navy and Indian Navy marine commandos relating to amphibious warfare,” US embassy in India said in a statement.

​The USS Pearl Harbor and the 15th MEU are currently deployed as a part of the USS America Amphibious Ready Group, which is operating in the Indo-Asia Pacific region to strengthen partnerships and serve as a ready-response force for any type of contingency.

“The Sailors and Marines of Pearl Harbor look forward to experiencing the culture and traditions of India while strengthening our long-standing partnership with the Indian Navy,” Commander Theodore Essenfeld, USS Pearl Harbor’s commanding officer said.

Ground Combat Element of MEU is comprised of about 1200 marines and sailors, and is fully equipped with weapons meant for close encounters as well as light armored reconnaissance vehicles, tanks, artillery, combat engineers and assault amphibian vehicles. Its aviation combat element is a composite squadron that provides the MEU medium to heavy lift capability, assault support and close air support (CAS).