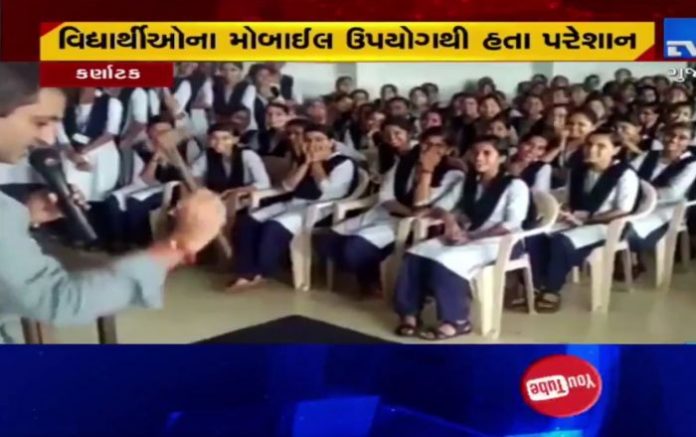 RM Bhat, the Principal of MES Chaitanya PU College in Sirsi, a city in Karnataka, was reportedly frustrated with students using mobile phones at college and during classes.

In a clip that has gone viral on social media, Bhat can be seen taking a hammer and smashing some mobile phones to pieces in front of the students at a college assembly.

The video spread like a wildfire on social media and a large number of twitterati were outraged at the principal’s act. Netizens expressed their disapproval and stated that the college authorities had no right to destroy the personal belongings of students.

What about principal and teaching staff mobile…Is it also hammered…🌝

Some might think this is the right way but this is not. This is his anger that made him do that. There are other ways too. Like confiscating phone till final exams or after a student applies for leave certificate to move from that college. Even calling the parents might work.

By smashing phones? Really, it might have been expensive phones aswell.

Phones should not be smashed.. instead.. they should have been suspended…

However, some netizens backed the principal, saying he was simply enforcing the rules.

A real courageous and admirable positive step. Spare the rod, spoil the child.

I am sure sufficient warnings were given. Some students just chose to defy all rules. “Baap ka paisa” how does it affect? Glad this teacher has set an example.

Well done Mr R.M.Bhat. This is what we need in all schools across the globe, regardless of the union (EU), continent, country, state, race, religion, state/private school. @educationgovuk @GSALPFA @ofstednews @DamianHinds @DailyMailUK @Telegraph @BBCNews https://t.co/CYmXuI1Km4

What this principal did is right by creating deterrence, Mobile phones can be brought later too not the time n studies wasted @nimmasuresh. Karnataka college principal smashes mobile phones in class to teach students a lesson – India News https://t.co/Gn2HJwQaO6

When contacted by Sputnik, the college authorities were unavailable for comment.