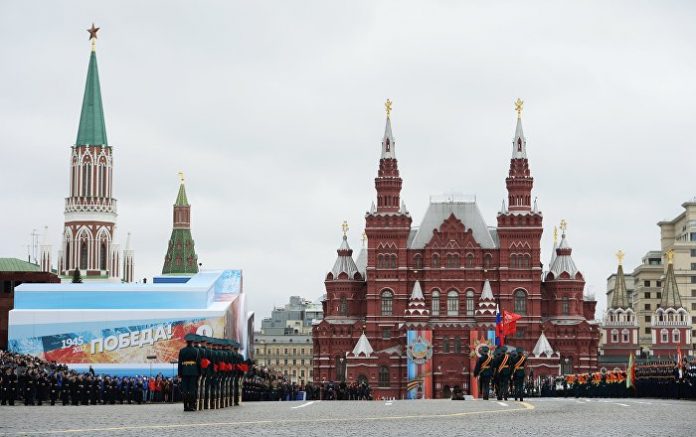 New Delhi (Sputnik) — “Victory Day”, an event marking the 74th Anniversary of the victory over fascism in the Great Patriotic War and the 75th anniversary of the Liberation of Belarus, were celebrated in the Indian capital city of New Delhi with a deep sense of emotion, pride, and solemnity.

At a special function, rich homage was paid by envoys of the Commonwealth of Independent States (CIS), which were once part of the erstwhile Soviet Union, as well as by ex-army generals, political and social leaders to the heroic Soviet people for their sacrifice and contribution to the great victory that signalled the end of World War II and of Nazi rule under German dictator Adolf Hitler.

A major highlight of the programme was a seminar titled “Impact and Lessons of the Great Victory of Soviet People over Fascism for Mankind”.

Three photo exhibitions, too, were opened on the occasion: “The Great Patriotic War in Paintings, Graphics and in Human Destiny”, “The Times Links (TASS)” and “Cost of the Great Victory”. These exhibits were presented by the Embassy of Belarus.

Speaking on the occasion, Nikolai Kudashev, ambassador of the Russian Federation to India, said: “The Victory Day has always been and always remained the dearest and most sacred day for every family, for not only our huge country but also for the world itself, a day of national pride and eternal unfailing memory”.

The ambassador said it is of “utmost importance to note that we must cherish the memory of the unparalleled courage of everyone on the frontlines and on the home front, of warriors who gave their lives, of all our soldiers and the brave fighters of the second front, of the contribution made by the anti-Hitler coalition countries, of the brotherhood-in-arms of those who stood up against Nazism”.

Describing World War II as the most destructive conflict suffered by the mankind, Major General G.D. Bakshi (retired), emphatically lauded the unparalleled courage of the Soviet Red Army which ultimately led to the unconditional surrender of the Nazi forces.

India’s immense contribution to that war effort was also recalled.

India was not an independent country at the time, yet its soldiers enlisted in their thousands to help the Allied war effort against Nazi Germany.

Former Vice Chief of Staff of the Indian Army Lt. Gen. Arvinder Singh Lamba (retired) emphasised the extreme care with which Russia wants to see India become self-sufficient and strong in all spheres.

India has always been an active participant in Russia’s Victory Day Parade, the event assuming great significance in view of the enhanced military ties and the special and privileged strategic partnership between the two countries, Major General Dhruv Katoch (retired), director of the India Foundation, a think-tank based in New Delhi, stated on the occasion.

“Russia’s Victory Day Commemoration on 9 May 2019 is thus a good occasion to once again review the strategic defence relationship that exists between the two countries and further strengthen the strong bonds that tie the two nations together”, he added.

India has always participated whenever Russia has invited it to such events, Brigadier Rahul Bhonsle, a security and strategic analyst, said on the occasion. “We (India) have a strong military-technical cooperation with Russia. We follow a policy of multilateral alignment in which the ties with Russia will continue to remain strong for another 30, 40, 50 years. Russia will remain the primary player; I have got no doubt about that”.