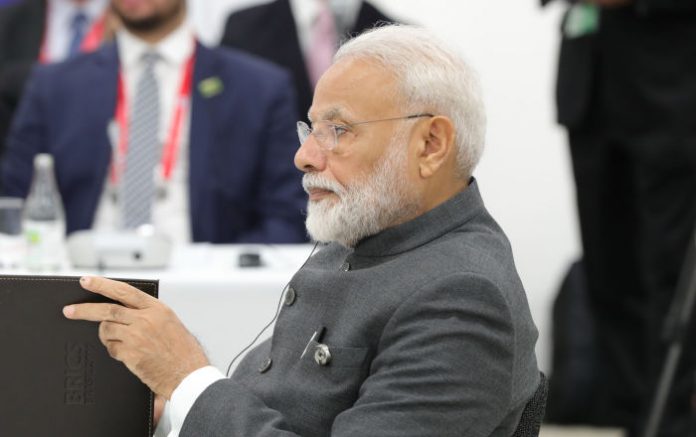 Modi said that in the past, India has shown its willingness to strike terror elements in their dens and would do it again. Addressing a public function in Mathura, 200 kilometres south of the national capital New Delhi, he urged the world community to take a pledge and stand up against those who give shelter and training to terrorists.

“Terrorism is a global threat, our neighbour is harbouring terrorists. The world should come together against the neighbour. We can tackle terror originating of our neighbour, we have done it in the past and we will do it again in future”, Modi said.

The Indian Air Force bombed a training camp of UN-designated terror outfit Jaish-e-Mohammad in Balakot in Pakistan-occupied Kashmir on 26 February. The bombing was in retaliation of a suicide attack on a convoy of Indian troops in Pulwama in the restive state of Jammu and Kashmir on 14 February, killing 40 troopers.

Again in March, Indian troops destroyed 10 camps reportedly belonging to an insurgent group from Myanmar which had threatened a multi-mode transit platform for cargo shipments from Myanmar’s eastern ports to the north-eastern parts of India.

The Pulwama bombing and Balakot airstrike led to relations between India and Pakistan plummeting further, which was then exacerbated by New Delhi’s decision to strip the special status granted to the state of Jammu and Kashmir.

New Delhi’s decision to abrogate Article 370 and 35A, which granted special status to the restive state, angered Islamabad, which mounted a diplomatic offensive against New Delhi to internationalise the Kashmir issue. Pakistan also downsized its diplomatic mission in New Delhi and suspended all communications and trade with India.

Pakistan claims that it is a stakeholder in the Kashmir issue and that India’s decision was unacceptable to it. New Delhi, however, stated that it was an internal issue of India.

Kashmir has been a bone of contention between the two countries since they gained freedom from British colonial rule in 1947. Both govern it in parts, but claim the territory in full.