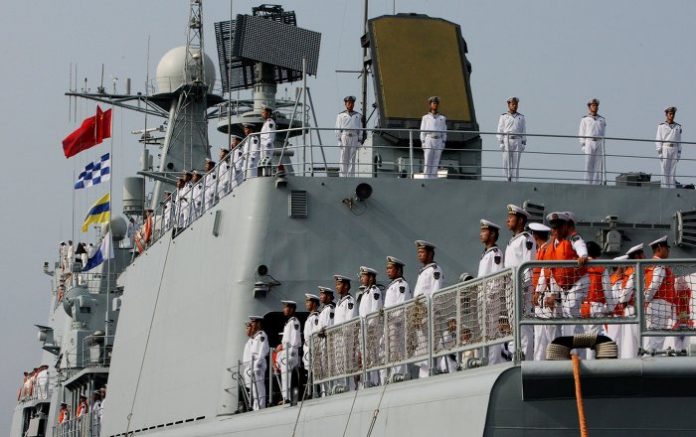 US and Japanese ships began the search on Tuesday when the sailor was found to be missing; Chinese ships joined the effort Wednesday.

In a statement, China’s Defense Ministry said that it decided to lend a hand “on the basis of humanitarian spirit,” and “according to the code for unplanned encounters at sea, carried out operational coordination with the US side.”

Homare Endo, however, who directs the the Tokyo University of Social Welfare’s International Exchange Center, says China’s contribution is also something of a public relations campaign. By helping with this rescue mission, China is trying to say, “‘See, we will help if someone is in trouble,'” she said, according to Stars and Stripes. “They want to show the international community.”

China’s actions may also put a positive spin on its growing military presence in the South China Sea. And, Endo said Beijing could also be trying to “regain face” after not properly thanking Japan for rescuing Chinese fishermen lost at sea after colliding with a Greek merchant ship last year.

Japan released a statement after the incident saying that China “expressed appreciation” for the rescue.

Either way,  China’s assistance in the search isn’t likely to affect Beijing’s relationship with Washington, she said.

As of Thursday the missing male lieutenant still hadn’t been found, US Navy officials say. While the search is ongoing the service will not release his name.

“The search is ongoing,” spokesman for the 7th Fleet Navy Lt. Paul Newell told Stars and Stripes. “We still have assets out there looking for this sailor.”

When the sailor was first reported overboard around 9:00 a.m. local time, two frigates from the Chinese People’s Liberation Army Navy were trailing the USS Stethem, a guided-missile destroyer, in the South China Sea. Beijing got involved Wednesday after a call went out to mariners asking for help in the in search-and-rescue effort.

“They were in the area,” Newell said. “It’s common for mariners to render assistance” after a sailor is reported overboard, he explained, saying China was “in a position to help.”

The search includes the Stethem, a Navy P-3 aircraft, the USNS Amelia Earhart and the USNS Vice Admiral K. R. Wheeler, along with two ships from the Japan Maritime Self-Defense Force; the JS Sazanami destroyer and the JS Izumo helicopter carrier. Helicopters from the Izumo are involved as well.

Beijing’s expansion into the contested South China Sea has included building artificial islands equipped with weapons on reefs in the area, which has drawn criticism from Washington.

China claims much of the South China Sea, which sees about $5 trillion in ship-borne trade annually. Its territorial claims have been contested by Malaysia, Taiwan, Vietnam, Brunei and the Philippines.