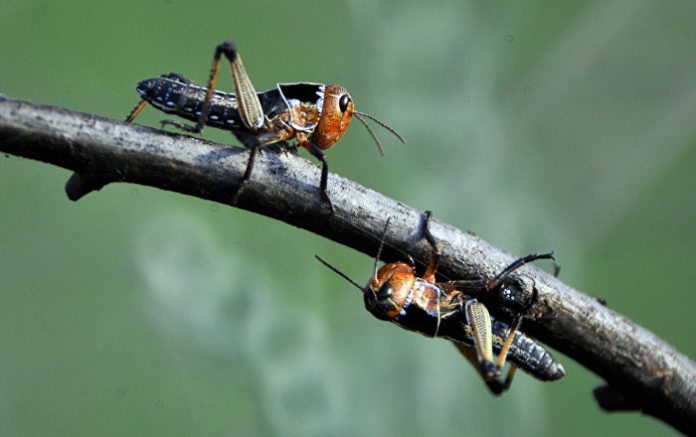 The capital of the Pakistani province of Sindh, Karachi, was attacked by a swarm of desert locusts flying in from Balochistan’s coastal areas on Monday.

Locusts are a collection of certain species of short-horned grasshoppers. According to an expert, heavy rains in Sindh and Balochistan during monsoon forced locusts to move away from the coastal areas.

An official at the Plant Protection Department Muhammad Tariq Khan said the insects, generally found in deserts, are not harmful.

Khan explained that the desert locust’s preferred habitat is in desert areas. Sandy soil with moisture and vegetation are required for their oviposition and breeding.

He added that the department was monitoring the situation closely and that desert locust control teams were prepared to overcome any risks the species might pose as per technical guidelines.

The Sindh government has also issued instructions for preventive measures in the city.

Reportedly, this is the second biggest attack on the port city since 1961, and experts believe that the invasion is due to recent climatic changes.

Locust invasion in Karachi. The last major attack took place in 1961 (pic 2). According to experts, the locusts have flown in from the coastal areas of Balochistan. They believe this invasion is due to heavy rains in Sindh and Balochistan during the monsoon season. pic.twitter.com/baiJBgWJ0w

​This is the third major invasion this year; the first two in September stayed in the planes of Sindh and Balochistan and destroyed the crops there.

Karachi residents were quick to react with videos of concern and fear over the epidemic.

This is horrifying; millions of locusts swarming over Karachi like an apocalypse is to come.
They are about to wreak havoc on the available farmland in Karachi; so lets eat them before they rot or run away. #Locust #ClimateChange pic.twitter.com/E9ylcG8Eoj

In my balcony in #karachi. Massive swarms of locusts! pic.twitter.com/Cp0NeGai1o

Locusts swarming in some areas of Karachi. pic.twitter.com/LLEWhICu6d

Locusts attack in Karachi 🦗🦗🦗
Need to find out its root. #Karachi pic.twitter.com/HWxlSQhFX3

Karachites are paying for those sins they did not even commit. https://t.co/lZrfAyrREM