Planning a Tanzanian safari can be a frightening prospect at first glance.

From calculating when to visit, which parks to include, where to stay, and how long you’d spend in each location these can be a stressful task, but we’re here to help!

This guide to planning your safari in Tanzania should give you a lot of inspiration for planning your ideal trip, and you can always contact one of our safari experts to help make your plans a reality.

Making a choice on which time of year to visit Tanzania can have a major impact on not only which parks you should visit and what you will see on safari, but also on cost.

At this time of year, tens of thousands of baby Wildebeest take their first “baby steps” and the herd remains in Ndutu to feed until it is time to head north.

When hotels can be difficult to find over Christmas and New Year’s, calving season is however a wonderful time to visit Tanzania.

Tourists are not as high as they are in peak season, but the weather is good and the guarantee of seeing the Wildebeest Migration in Ndutu makes it a great time to visit.

Green Season – April and May

The rainy season might not seem like a great time to go on a Tanzania Safari, but the lower crowds mean you’ll have access to luxury lodges at a greatly reduced rate.

While tented camps and camping are not ideal in the wet conditions, luxury lodges such as Serena, Sopa, and the Four Seasons are all much more affordable in the rainy season.

Good points: Staying in luxury lodges in Ngorongoro and the Serengeti.

Without a doubt, the most popular time of year to visit Tanzania safari tours , June through September is characterised by the movements of the Wildebeest Migration from the Southern Serengeti to the Maasai Mara in Kenya.

For those wanting to see the herd in motion and have the chance to witness a river crossing at Grumeti or the Mara River, this is the best time to visit.

Of course, peak season also means higher prices and more crowds to contend with – but many find that the extra cost and crowds are worth it for the chance to see a Mara River crossing.

Focal points: Chasing the Wildebeest Migration across the Central and Northern Serengeti.

Sometimes known as the short rainy season, October and November are another quiet time of year in Tanzania.

With the Wildebeest Migration in the Maasai Mara at this time of year, your chances of seeing the herd are slim.

While lodges aren’t as cheap as they are in the rainy season, there are fewer crowds in the parks.

The weather is also better than in the long rainy season, making it a good time to avoid the crowds without having to deal with the rain.

Focal points: Exploring parks such as Lake Manyara, Tarangire, and the Serengeti without the crowds.

Issues: The only time of year where the Wildebeest Migration is not likely to be in Tanzania.

The brightly coloured flocks of flamingos are difficult to find, as their movements are both seasonal and affected by water levels and water salinity.

Lake Natron is the most popular place to spot flamingos in Tanzania, but they can also be seen in Ngorongoro Crater and Lake Manyara at certain times of the year.

Lake Bogoria in Kenya is generally the best place in East Africa to see flamingos.

Wallowing hippos are a popular (and pungent) sight on safari.

The best places to see hippos are the Serengeti, Ngorongoro Crater, and Lake Manyara during the wet season.

Giraffes and zebras can be seen virtually everywhere in Tanzania.

Bird-watching is fantastic across all of Tanzania’s national parks, but Lake Manyara and Arusha National Park are generally considered to be the best destinations for birders.

While many of Tanzania’s national parks are home to baboons, the best place to see a variety of primates is undoubtedly Arusha National Park where black and white colobus monkeys are an especially popular sight. 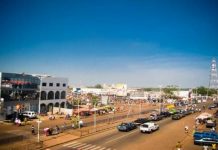 Top 5 African Countries to Visit In 2019 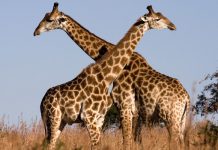 Adventure Travel in Africa: The Best Places to Visit 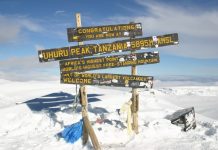