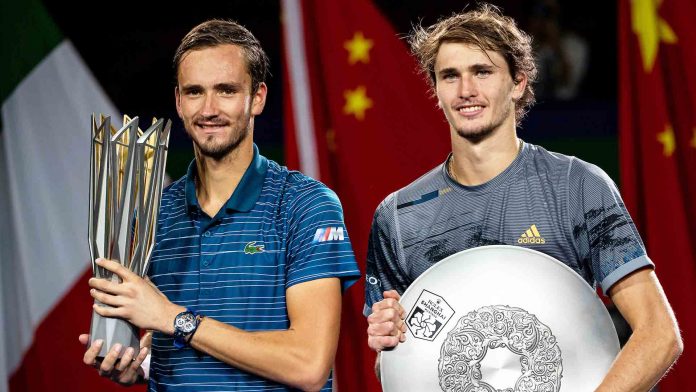 Alexander Zverev enjoyed a resurgent week at the Rolex Shanghai Masters, reaching his first ATP Masters 1000 final of the year. In the process, he surged into seventh place in the ATP Race To London as he pursues a spot in the Nitto ATP Finals for the third consecutive year.

But in the Shanghai final, despite taking a 4-0 FedEx ATP Head2Head series lead into the clash against Daniil Medvedev, the German simply came up against a player in form that was too good.

One may wonder how the three-time Masters 1000 titlist had defeated the Russian four times with the loss of just one set previously, but as Zverev said, “He’s a different player now. You can’t compare.”

“We play against different players every single day of our lives. Every single player is different. There are no players that play the same way,” Zverev said. “He plays very flat. He plays with shots that you can’t really do anything with the ball, I feel like, and that is difficult to play against him in an aggressive way.

“Sometimes that’s maybe why it looks on TV or from the outside that players are not playing as aggressive against him as against others, but I feel like he doesn’t let you.”

Zverev has done well this week limiting his double faults, striking only three in the final, which is a far cry from the 20 he hit in a Cincinnati loss against Daniil Medvedev. But back-to-back double faults at 4-5 in the opener cost the German the set, and that proved too tough to recover from.

“Confidence was a big factor today, and he’s way, way more confident than I am in big moments in finals right now, because I always was somebody that in the big moments kind of played my best. But right now he’s been to six finals in a row, so he’s more used to it than I was.”

Despite the loss, it was a confidence-boosting week for Zverev, who ousted Roger Federer in the quarter-finals and then in-form Italian — and fellow Race contender — Matteo Berrettini in the semi-finals.

“I feel like I’m playing well. I feel like I’m on a very good path again. But obviously I have to be on this path for a longer period of time, I think. But making finals of a Masters [1000] is huge for me right now, and I’m very happy about that.”

The only thing that would have made the week better is lifting the trophy. But Zverev knows that he had to overcome one of the sport’s most difficult obstacles at the moment in Medvedev, and he did not have enough on the day.

“As I said on court, he’s probably the best player in the world right now,” Zverev said. “Credit to him.”

Humbert Breaks Into Top 50, Mover Of The Week

Isner Pledges 25% Of Prize Money To Bushfire Relief, And That's Not All…

South Africa Today Sport - January 20, 2020
0
We use cookies to ensure that we give you the best experience on our website. If you continue to use this site we will assume that you are happy with it.OkRead more